For the third consecutive year the association MATRIA announces its III Short Story Contest for equality. There will be two awards, one for writers and one for the general public, which will be delivered on April 24 at the Dénia Library.

ONE. All those who wish may participate, provided they present original and unpublished texts, not published in any form, either totally or partially (including Internet), not rewarded or pending failure in other competitions, or waiting for a response in a editorial process

TWO. The theme will be gender equality.

THREE. It may be written in any of the official languages ​​of the Valencian Community.

FOUR. The original admission period will end on Sunday, April 5, 2020.

FIVE. The work will have a maximum length of 500 words.

SIX. The original must be typed in double space, using an Arial or Times New Roman type, at 12 points.

SEVEN. The original of the work will be presented in paper or digital format. The text must be sent to the Associations Headquarters, located in Carrer de Campo Torres, 13 (03700, Dénia) indicating in the
Forwards: FOR THE THIRD LITERARY CONTEST "MATRIA, FOR GENDER EQUALITY" 2020.

If it is a digital file, the shipment will be made to the electronic address: associaciomatria@gmail.com. The subject of the mail will specify: "Matria, for Gender Equality 2020". Two attached files in Word or PDF format will be sent in the same email: a) In a file, which will be called with the TITLE in capital letters, the text will be sent with a pseudonym. The title of the work will be indicated and the SEUDÓNIMO in the following line, followed by the text. b) The second file will be named with the TITLE OF THE WORK - PLACE where the personal data corresponding to the pseudonym of the work, the current address, a contact telephone number and an email will be revealed.

EIGHT. Two prizes will be awarded. One, only for authors, will be a dinner for two people with? Amenco in “Condado Gastro Show Club”, (Carrer del Marqués de Campo, 42. Dénia) and a summer course at UNED. The other prize will consist of a trip to the Balearic Islands round trip from Dénia and another summer course at the UNED. The two winning stories, on the other hand, will be published in the newspaper "Canfali Marina Alta".

NINE. The ruling will be final and will be made public in a literary event that will take place in the Public Library (Carrer San Josep, 6), on April 24, 2020, at 20:XNUMX p.m., in the framework of the International Book Day celebrations.

TEN. The Organizing Committee of this literary contest will not maintain any communication with the participants regarding its texts, nor will it offer any information prior to the award decision. No members or relatives of Matria may appear. The fact of attending this prize implies the total acceptance of these bases. 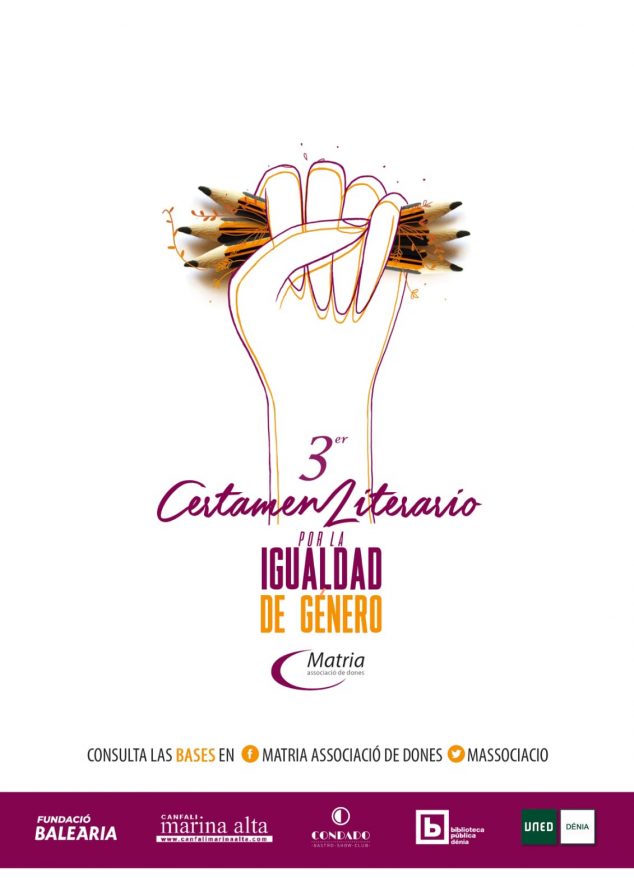 "I go on stage to be free, to laugh and cry without hiding anything": today is World Theater Day
March 27 2020

The # SubiendoonosPorLasParedesFest is born, an online music festival with regional participation
March 17 2020

Museums and castle of Dénia closed from today
March 13 2020

The Dénia libraries are closed
March 13 2020
Leave your comments