March ends 1.815 fewer jobs in the Marina Alta and unemployment rises by 933 people

As of March 31, the people affiliated to Social Security in the Marina Alta were 51.954, which means that to date the region has lost 1.815 members. If we compare this same month of the previous year, we highlight that the variation of affiliates in the month of March compared to 2019 has decreased by 4,19%. It is in the services sector where this drop in membership is most accentuated, specifically the restaurant and construction sector, both if we compare it with the previous month and if we compare it with the first quarter of 2019 (-12,7% and - 7% respectively). The drop in affiliations has been concentrated among the group hired by someone else. In March there are hardly any differences with respect to the previous quarter in terms of the loss of self-employed workers (25 contracts for employed persons less than the previous quarter, reaching 16.607). 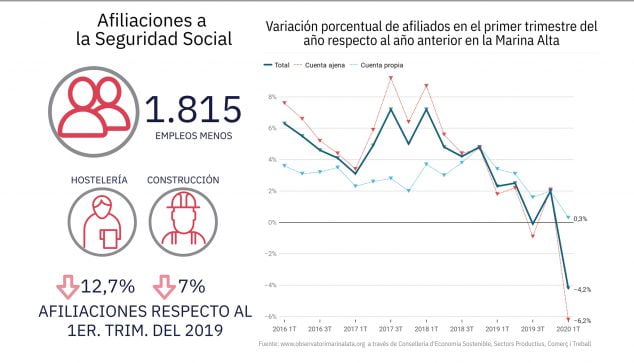 At the same time, the list of people registered in the State Public Employment Service (SEPE) in the Marina Alta increased by 781 people compared to February -a figure that does not include the first registered by ERTE-, it is the most negative data since March 2019. In this way, registered unemployment shoots up to 11.769 and experiences a monthly rise of 7,1%. The services sector, the productive sector most affected by the health crisis suffered, ended the first quarter of last year with 8.222 unemployed. There is an increase of 11,5% in this first quarter, reaching 9.166 jobseekers in the tertiary sector.

We are talking about the highest unemployment rate in the last 5 quarters, reaching an estimated rate of 18,47% in this last quarter, which represents an increase of almost 2 percentage points compared to December 31, 2019. 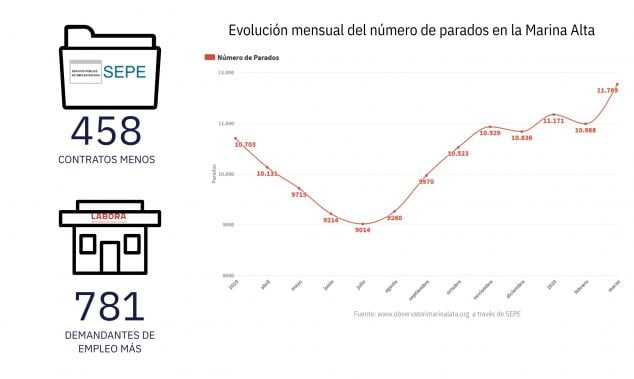 Evolution unemployed in the Marina Alta

Workers with temporary contracts have been the main victims. Where contracting has decreased the most according to duration, they have been in temporary contracts, reaching this last quarter the lowest value of those seen in the last five years. A figure below 7.000 contracts (decrease of 16,8% compared to the number of contracts in the first quarter of 2019).