The restrictions decreed to stop the alarming curve of the coronavirus, which in our region and municipality leaves an incidence greater than 1.000 cases per 100.000 inhabitants, represent an inevitable hard blow to companies. It is about the famous debate that has been with us for almost a year: save health or the economy. Which does not mean that a balance can be found, which is what different sectors are fighting for these days.

The demonstrations are becoming a regular feature of the Dianense landscape. Today the hoteliers have gotten into their cars to protest, tomorrow it will be the turn of businessmen in the gym and sports sector. The latter will do so on foot, in the Plaza de la Constitución at 10:30, with the controversial slogan announcing "Open or Die".

But the controversy of this movement does not remain in that sentence, but they announce that they have the support of the Dulce Revolución association, belonging to the farmer and popularizer of pseudosciences Josep Pàmies. What's more, the organization has admitted to this medium that they maintain contact with the healer whom the prosecution has their eye for spreading their denialist theory. Pàmies has encouraged and directed different demonstrations throughout Spain in recent months in which not only protective masks have not been used, but participants were encouraged to kiss and hug each other to show that they are not afraid of the coronavirus.

The organizing association, called "United by Necessity", is defined as "neither of the right nor of the left" and prefers not to position itself as to whether COVID-19 exists or whether vaccines are beneficial, "everyone can have their own opinion". It is a group formed for the occasion, made up mostly of businessmen from the gym and street vending sector, but also some hoteliers. Its objective? Topple the current fear to avoid "a collective poverty never seen since the Second World War".

To achieve this, in addition to criticizing government restrictions, they ask that vulnerable and at-risk people stay at home "where they can feel more protected and safe so that [others] we can move the economy forward and save our businesses and our future ". Of course, at the same time they affirm that "loneliness also kills". 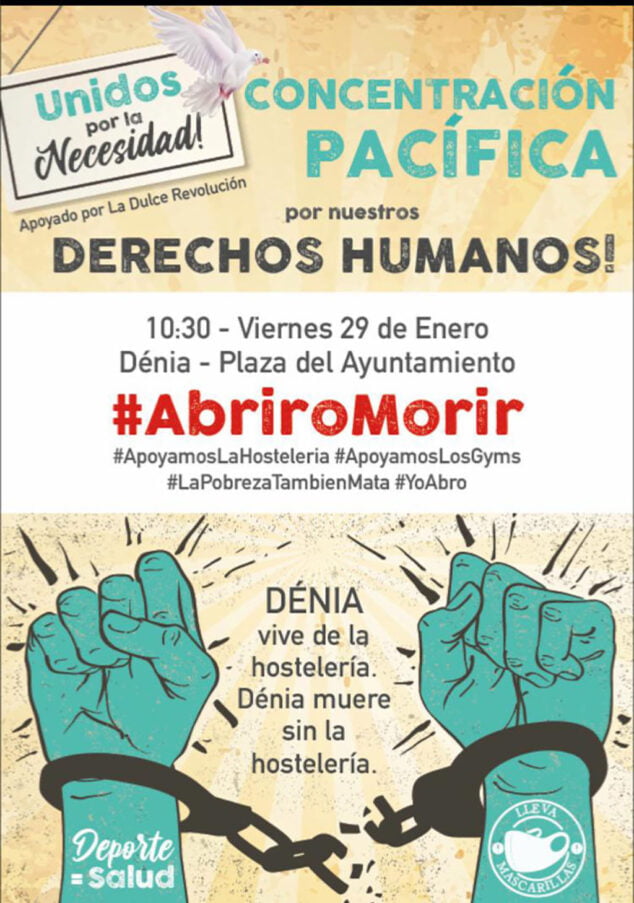 Poster of the demonstration called by United for Necessity
Related articles