The representative of the Texlimca company for the selective collection of used clothing and footwear, Juan Carlos Aranda, has delivered to the mayor, Vicent Grimalt, in the presence of the councilors of Social Welfare, Cristina Morera, and Ecological Transition, Maite Pérez Conejero, the donation made by the company annually to the City Council of Dénia for use for social purposes. 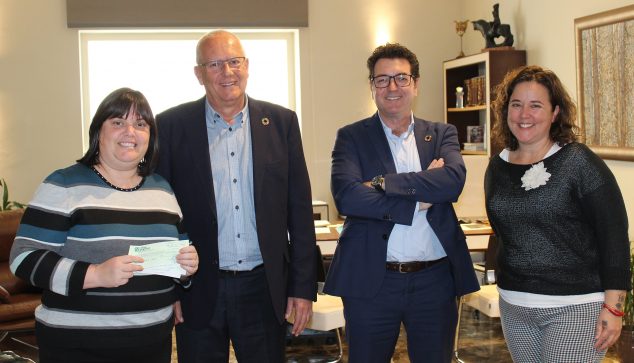 Delivery of the donated check

The donation corresponding to the year 2019 amounts to 5.675,36 euros and will be distributed equally among the entities that make up the Solidarity Roundtable (Red Cross Dénia, Caritas Interparroquial, Extend your hand and the Salvation Army).

According to the company, in 2019, a total of 22 net kilograms of used clothing and footwear were collected in the 70.942 Wippy containers installed in Dénia, La Xara and Jesús Pobre, 6% more than in the previous year.

The points of the city that have registered a greater deposit of clothing and footwear used in the blue Wippy containers are the Camí de Sant Joan, the intersection of Carlos Sentí with Marquesado Avenue, Ronda Muralles, Diana Street and Miguel Hernández Avenue.

From Texlimca it is recalled that, to facilitate collection and obtain a better use, clothing, footwear and accessories must be introduced in the containers identified with the Wippy symbol in closed bags, which will be duly separated in the plant and sent to a manager its recycled