The 28th Mostra de Teatre arrives, with proposals from Russia and Algeria and proceeds for 'Amunt against cancer'

The month of June arrives in Dénia full of theater, with one of the most consolidated proposals of the cultural calendar of the city. From the 1 to the 9, the 28 Mostra de Teatre Ciutat de Dénia will be held at the Social Center.

The novelties and programming of this edition have been presented by the director of the show, Mario Passero, next to the youth councilor, Cristina Morera, which has announced that the collection this year will go to the association Amunt Against Cancer, a regional entity that helps people suffering from this disease and their families. 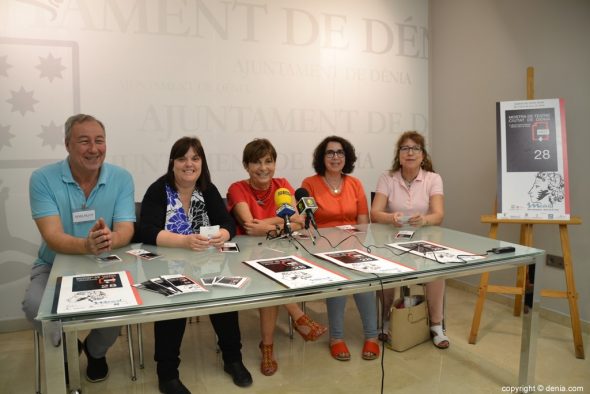 Among the novelties of this year include the opening of the show, on Thursday 31 of May, with a youth work out of competition, as well as the participation of a Russian group and another from Algeria. This collaboration is carried out thanks to the Fundació Baleària and it intends to be the door to a series of collaborations between the Escola de Teatre Comarcal (ETC) and the Algerian theater.

The director of the show said that this year's edition includes all styles, with a strong commitment to young groups.

Tickets will have a price of 5 euros and can be purchased every day at the box office. In addition, Amunt will collaborate with the sale of advance tickets in Inforway, Karmen Silverware, Natali Hairdressing, optical Agos, Stilo Optic Line, Jewelery Mongana and the tourist offices of Dénia.