The VIII Gitarrentage reduce its duration one day cuts

Although they are difficult times for everyone, the organizers of the VIII "Ciutat de Dénia" Guitar Days are satisfied that this year, despite having reduced the duration of the conference one day, this classic one can be celebrated appointment of the month of September that arrives in our city from the 13th.

The format of this year will be three days, although it will have a quality assured by the participants. The councilor for culture, Pepa Font, Accompanied in the presentation of the conference organizers, Celso Crespo and Pepe Ortolà, members of the Companyia Nova de Guitarres.

Like every year, will open the conference members Nova Companyia de Guitarres, Which on Friday 13 20 hours to present their new album "Tower of the Galliner"Full of songs composed by Pepe Ortolà and other versions of classics like the song pascuera "La Tarana" in jazz version. Also on that day, before the concert begins, delivery of the Award for the Dissemination of the Guitar.

14 Friday will be the turn of flamenco, one of the genres that has more followers in Denia, with a performance by singer "Serranito"An internationally renowned singer counts in their windows with a Latin Grammy award.

"Serranito" will also be in charge of teaching a masterclass on Saturday 15 in the morning at the Municipal House of Culture directed to guitarists of all levels in which will explain specific techniques for each hand. The masterclass will have a price of 15 € and will be developed from 10 to 13: 30 hours. Students who wish may come with their instrument.

On Saturday afternoon 15 will reach the last concert, this time classical guitar, by Fernando Espí, One of the best guitarists of his generation prsentará a didactic concert his latest work "The Illustrated Guitar".

Concerts begin at 20 hours in the Assembly Hall of the Municipal House of Culture and will be priced at 10 euros, except the Companyia Nova de Guitarres, which can be accessed by 7 € in which it includes resources their new CD.

During the eight years of life of Gitarrentage they have been many artists who have passed, highlighting names like Toni Potolí, Alberto Tarín, Kiko Aguado, Celia Mur and Carles Trepat, and local Clara Sakardi, director of the choir of Denia; Vicent Ballester, Eva Olivencia, Josep Miquel Pérez Pastor. In 2011 500 more people enjoyed the concerts of Gitarrentage. 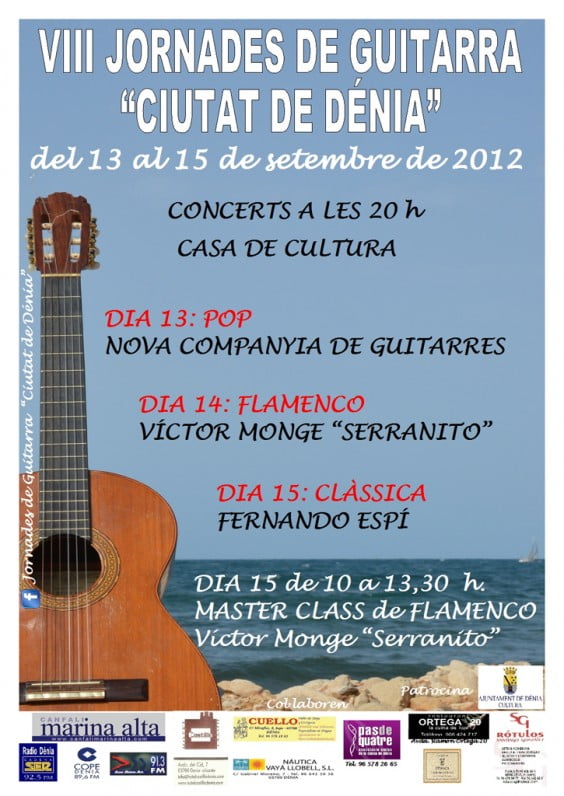