In Tuesday's update of the data obtained from the PCR in the Marina Alta the total of positives was repeated, exactly the same, as that of former, published on Friday. Although it is true that they could be better, dwelling a little on these figures, somewhat comforting news can be extracted from them. 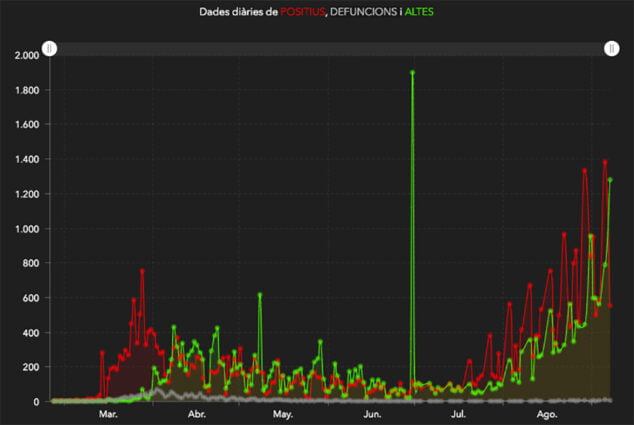 Evolution of daily cases in the Valencian Community

For example, the most notable is that They are lower figures than those experienced in previous updates. That is to say, the new positives give this area some breathing space. On the other hand, it is just as appreciable that, since the same figure is identical, a priori it indicates that the trend of the department is established and begins to be controlled.

The importance of counting

It is important to understand during what period these samples have been collected, all grouped together to be published by the Ministry in the same day. This is not data from the last 24 hours, but, somewhat incomprehensibly, correspond to a period of several days.

Therefore, if we distribute these totals by days, we discover that the average on Friday in the Marina Alta was 40 positive per day, while that of Tuesday was 7, a quarter less.

By municipalities, the difference is optimistic again

In the case of Dénia, which has seen its figures increase a bit in this latest update, going from 58 registered on Friday to 63 on Tuesday, exactly the same happens. At first glance it seems that they have worsened, but the daily average on Friday was 19'3, while that of now is 15'7.

We can apply this to most municipalities. Let's stop at those that may have been the most alarming or striking. Ondara it went from 8 to 10. To begin with, the difference is not so abysmal for the alarm that has been generated. But if we also make the comparison by days, we see that on Friday it registered 2 daily positives and now it is registering 7, slightly better even though it seemed to be getting worse.

En Xàbia The rise in new cases in Tuesday's update was also very striking, going from 18 to 26, but the average barely grew by half a point, going from 6 daily positives to 6.

We have become used to keeping the number and not translating it to understand what it means. "We all know", we assume very wrongly. Therefore, it is important to remember again that, in these cases, we must continue to explain what each number and each change means to avoid misinforming and misinforming ourselves.