The demonstration "For freedom of expression" brought together 400 people

The demonstration called by the Union Public Employees of Valencia called 400 people who started the journey from the square Archduke Charles, to the square of the Constitution, at the foot of City Hall. Once there, Enrique Alcaraz, union general secretary read a statement of thanks to the political organizations present at the demonstration.

There was no lack of representatives of Els Verds, Esquerra Unida, PSOE, Compromís, UPyD, We Can Marina Alta and the Platform affected by the mortgage. Also to the Interterritorial Coordinator of Public Employees and to the SIME (Murcia), Afapna (Navarra), Star (Rioja), Sepca (Canary Islands) for their support and also to the workers of the Residence of Santa Llúcia who were the ones who encouraged him To make the demonstration. 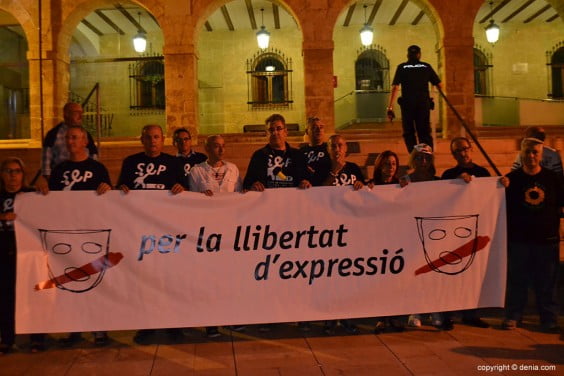 He had harsh words for politicians in the municipal government, " that is dirty is not the streets but this council. Those who should be held accountable and cleaning are not those responsible and their workers"

He referred to the particular case of Andrea Pastor, " We can not lead a political director or mayor is the one that decides what can be said or not. And depending on what she looks good or not, what seems lie or truth, you can pull a person on the street".

The demonstration was running very orderly and quiet without any alteration.