The insufferable coexistence in Dénia with the seagulls: from daytime aggressiveness to nighttime uproar

What's wrong with the seagulls this year? It is the question that many citizens of Dénia have been asking for weeks. Coexistence with these birds is becoming very complicated lately. And we no longer say this only because of the attacks that have occurred during the day, but because at dawn they make life impossible for the neighbors with whom they share the neighborhoods. 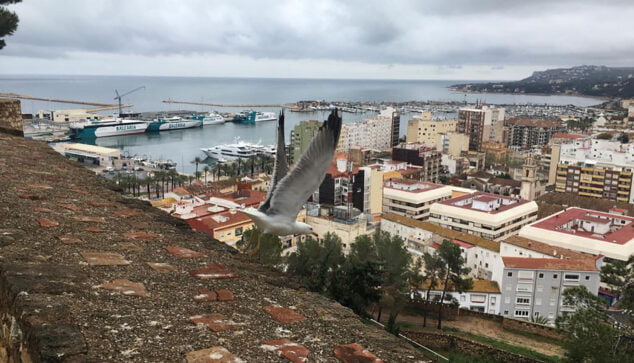 Seagull flying towards Dénia from the Castle

The seagulls have become a problem. In fact, so much so that it was one of the topics of discussion during the debate on the state of the municipality in the Dénia town hall. It is not for less, since several cases have come to light in which people have been attacked by these birds in the city.

But what is the reason for this "sudden" aggressiveness? They seek to defend their territory and, above all, their young. Since April is their nesting and breeding season. The problem is that it seems that this year they have considerably expanded their territory and have appropriated dozens of roofs to place their nests throughout Dénia, in neighborhoods as disparate as Faroleta-Diana or Oeste.

Gulls conquer beyond the walls

The main action of the Dénia City Council to control the proliferation of these animals is carried out in the castle. Within its wall they found a home and protection for their nests, conquering the area to take care of their young. But, to prevent the population of seagulls from continuing to increase in the municipality, the council has ordered the eggs to be punctured on the spot and thus prevent procreation.

Now, the problem is that they have abandoned the castle. Today the seagulls roam freely throughout the municipality. In fact, in the pedestrian streets they behave like pigeons: shamelessly, on the lookout for the terraces in case some food falls on them. They even meet in playgrounds even if they are full.

Sleepless nights with nests above their heads

And when night falls, the worst comes. From approximately 5 in the morning, the seagulls begin to say good morning with their strident squawks, which have much to envy the pleasant song of other birds. It is enough to walk down any street to hear in the skies, on the roofs of buildings to be more exact, the constant cawing that has kept the residents of many blocks awake for weeks.

In those nests that have been placed throughout Dénia no measures are being taken. They are more difficult to locate and control, so they have found a good place to increase their population. Of course, at the cost of the rest of those with whom they share a building.

Luckily, the nesting season is coming to an end, it usually ends around July, so many of the problems they are causing will be diluted. See you next year.

It is already perelló season in the Vall d'Ebo: the cultivation of the mountains that refuses to disappear
November 12th 2022

The images left by the storm in Dénia: destruction and flooding in just a few hours
November 11th 2022

Murder attempt in Dénia: a man is repeatedly stabbed after arguing in a bar
November 11th 2022