The Fundació Baleària organizes an 'online' meeting of classical music

La Fundació Baleària organizes an online classical music meeting next Saturday at 18.00:XNUMX p.m., which can be followed through the company's YouTube channel. It will have eight performances by musicians or chamber orchestras from different territories in which the shipping company operates: Mallorca, Menorca, Ibiza, València and Dénia. 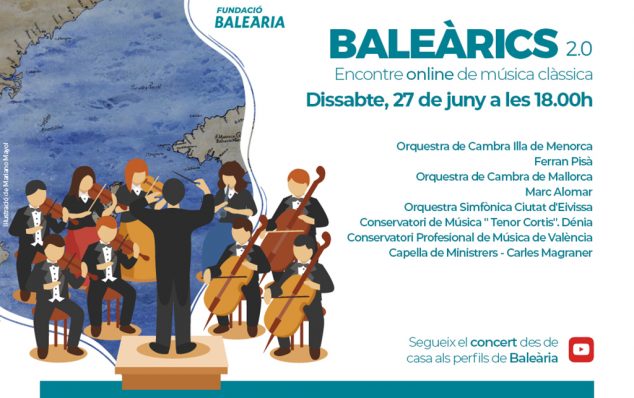 On this occasion, classical music is the protagonist, with performances ranging from soloists to small concerts starring high-level artists in this style. From the Balearic Islands, Ferran Pisà, who plays traditional stringed instruments, and Marc Alomar, who played with cello, will take part; In addition, the Cambra Orchestra of the island of Menorca and the Cambra Orchestra of Mallorca will also perform, as well as the Orquestra Simfònica Ciutat d'Eivissa. From the Valencian territory, musicians from the Conservatori de Música Tenor Cortis de Dénia, and from the Conservatori Professional de Música de València will participate, and finally the group Capella de Ministrers, led by the Valencian musician Carles Magraner.

This is the sixth online cultural event organized by the entity, and is part of the Baleàrics 2.0 program that since April has sought to bring culture home. Since this festival started, four concerts of different musical styles and a meeting of poets have been held. Now it is the turn of classical music, one more example of how art and music can build bridges between cultures separated by sea.

Bassetes' agenda is transferred, in its most solidary version, to Torrecremada by COVID
June 24 2020
Leave your comments