Last February it was held in the Jauja room, organized by the Fundació Baleària, the concert of the groups Projecte Mut y Gin Lemon's. Thanks to the sale of tickets they managed to raise 500 euros, which will be reinvested to multiply the profits with the sale of lithographs by the local artist Joan Castejón.

And it is that these 500 euros are going to be used for the purchase of 150 lithographs from Castejón, whose profits will go to the project Reintroduction of the Fishing Eagle in the region of Marina Alta and La Safor. 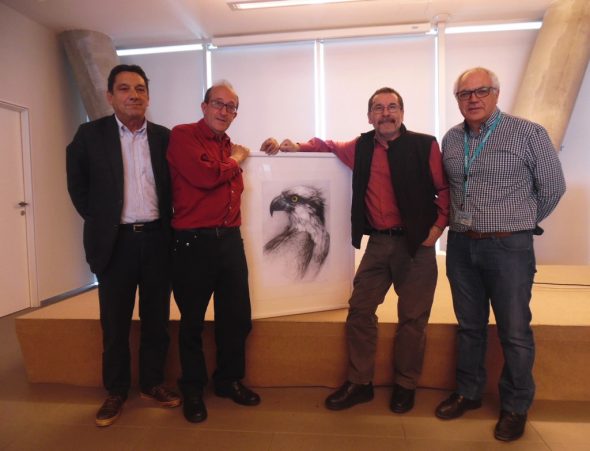 This is 150 serial graphic works, signed and intervened by the author Joan Castejón that, with a price of around 100 € per piece, will go to raise more funds to develop this environmental project. The works will be able to be acquired soon in several physical sale points of the zone of the Marina Alta, like the Bookshop Publics or Ivars Quadres, as well as through the web of Magic & Nature.

Reintroduction of the Fish Eagle

The project of reintroduction of the osprey in La Marina Alta and La Safor seeks to establish the bases to propose the creation of a stable population of eagles in the two regions, which will be able to pair with those that already nest in the Balearic Islands and other Mediterranean areas as Sicily, Corsica, Sardinia, Italy and France. The success of the program would allow recovering a species that was considered extinct four decades ago and which until now has only been successfully reintroduced into the Strait, Portugal and the Basque Country.

It is planned that this summer start the project by releasing chickens in two of the three natural parks in the area: the cliffs of Cape Sant Antoni, and the wetland of the Marjal de Pego-Oliva natural park.

The initiative of this project is from Magic & Nature, as a collaborator of the technical team of the CSIC and the Migres Foundation, as well as of Acció Ecologista Agró. The Department of Medi Ambient and the municipalities of Pego, Oliva, Xàbia and Dénia also participate.