About 100 people gathered yesterday in the Assembly Hall of the House of Culture de Dénia where the presentation of the book «Festa, creu i lluna» and the video «Gesta Hospitalaria» of the Filà Guerrers Hospitalaris were presented. The event was also attended by the Party Councilor, Oscar Mengual, the President of the Femmicc, Jaume Ferrer, and the treasurer of the UNDEF, Rafael Sanieronimo, as well as the captains, positions, first, festers and guests. 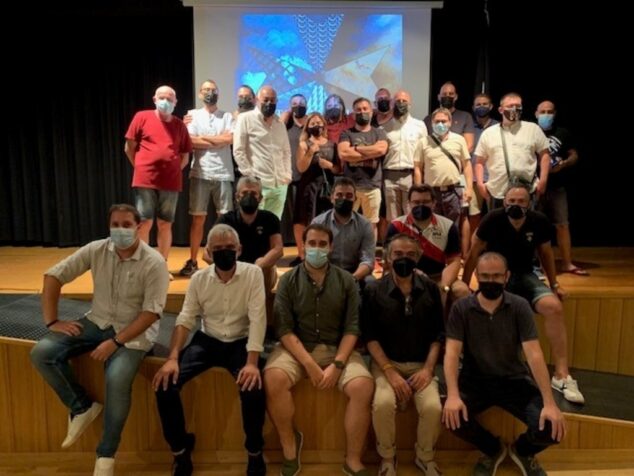 The event, led by the master of ceremonies Amparo Mata, began by welcoming those present, remembering that the party is still alive and sending a message of hope as the parties will return.

Next, Miguel Ángel Fullana took the floor to present the hospital book «Festa, creu i lluna». The cover designed by the artist Óscar Llamas was unveiled, representing the battle of Arsuf in the Third Crusade, where the victory was achieved by the Christian troops thanks to the bravery and courage of the Hospitaller Christian Knights.

The skins of the Maltese Cross represent the scales of the dragon of Saint George, the chainmail of the Christians, the white linen of the Maltese Cross of the red djellaba of the Hospitallers and the leather of the shields with which the troops hospitable defended their honor and faith.

A total of 180 pages and 43 collaborations with his articles and photographs form the soul of the book. The plot line is festival program and its different acts, as well as external visions of the party. It is a book of memories, visions, constructive criticism and feelings available in digital format from August 3

Immediately afterwards, Salvador Gil García de León took the floor to present the video "Gesta Hospitalaria". He stressed that, "if they don't see you, you don't exist", that the festive group had never left and that they will return, that this video, like the book, is to have a festive presence in these times.

A video shot in Dénia, with strong sentimental components, telling a historical feat and starring new people in interpretation. After its viewing, it got the unanimous applause of the audience present in the room. The premiere is scheduled on August 12 on RRSS and YouTube.

The presentation ceremony continued with the words of the President of the Femmicc Jaume Ferrer, shocked by what he witnessed, congratulating them for these initiatives that make this party great.

The event was closed by the first Tro de la Filà Hospitalaris Daniel Carrió, who excitedly thanked all those involved in the making of the book and the video for their effort, ending with a message of encouragement, support and strength for the entire festive group.