Last weekend the presentation of the Mora Captaincy 2023 took place. A position that will be held by the Row Amiries, One filaes founders of the party 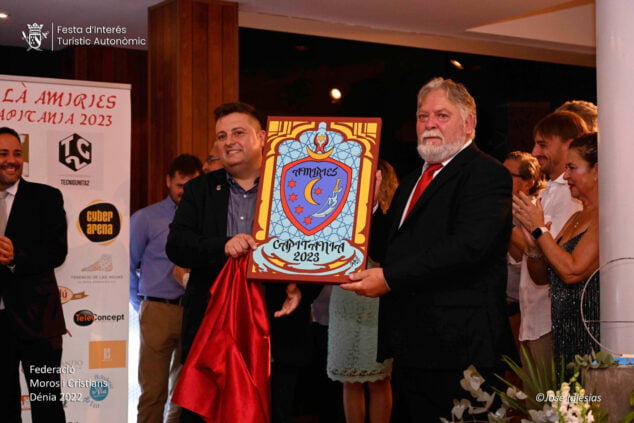 The presentation ceremony was held in the halls of the Dénia Yacht Club and had a large influx of officials, Primers Tró, family and friends. The mayor of Dénia was also present, Vicent Grimalt. Previously, the festeros of the Filà Amiries carried out a parade where they collected the different charges at their home to pay tribute to them accompanied by their Montaverner Music Band.

Josep Sales, secretary of the Filà Amiries, became the master of ceremonies during the presentation act. Moment in which part of the history of the filà was told, as well as all its historical evolution, including anecdotes of the party.

On the same stage paraded both the first trio, Víctor López, as well as the president of the FEMMICC Dénia, Sonia Pérez, and the Councilor for Fiestas in Dénia, Óscar Mengual. To receive and present the charges, all the First Tró of the rows were called to attend this act of presentation.

The festive Rafael Cheli was in charge of presenting the Moro Ambassador, José Domingo Crespo. For their part, Adela Marza and Maria Romany did it with the Mora standard-bearer, Gema María González, and Josep Sales himself did the same with the Moro Captain, Pere Juan González.

The speeches of the maximum festive representatives of the Moorish side also had a place in this exciting presentation act. In addition, the shield of the Mora Captaincy 2023 made by the Dianense artist Óscar Llamas was unveiled.

The day ended in the wee hours of the morning with a dinner, Moorish marches and a great festive atmosphere. From the FEMMICC they congratulate the Filà Amiries for their Captaincy Mora 2023. In addition, they have insisted that they enjoy this exercise full of illusions and emotions.