This Wednesday, January 18, a delegation from the FEMMICC Dénia, represented by the president, Sonia Pérez, and the secretary, Santi Escortell, was at the FITUR 2023 inauguration, the most important Tourism Fair worldwide that is held during this week in Madrid. 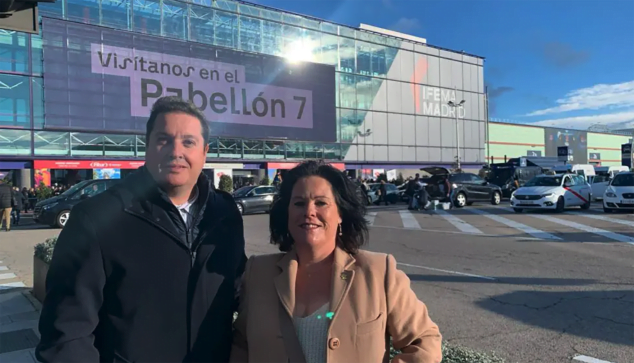 The federation was invited by the Dénia City Council and by the person in charge of the Tourist Area, the mayor Vicent Grimal. Right there, they were able to enjoy the two stands where the Dianense city is present. Both the Costa Blanca and the Valencian Community stands for being UNESCO's Creative City of Gastronomy.

This intense day served to share experiences with those present and authorities, but also to witness the inauguration by SS.MM the King and Queen of Spain and support the Dianense town hall in the Viu la posidònia project. But mainly, to promote and carry the party of Moors and Christians Denia.

"FITUR has been fundamental in promoting, explaining and publicizing our party"

The president, Sonia Pérez, has indicated that being present at this Madrid Tourism Fair has been essential to promote, explain and publicize the festival. More being declared as a Festival of Autonomous Tourist Interest.

For his part, the secretary of the federation, Santi Escortell, stressed that “our party has to have something special when on the afternoon of August 15 you gather more than 25.000 people in a street to watch a parade. That is what we have to transmit and explain why the Moors and Christians festival in Dénia is unique and what attractions emanate from it for visitors ».

From the federation they have stressed that the experience has been more than positive and that these initiatives will always be welcome, either to support the initiatives of the Dénia City Council or to promote the party.