The game started with a lot of rhythm and both rivals did not take long to generate good chances. The Catalan team, with a young squad, imposed high intensity and rolled the ball quickly, with passes into the gap and fast counters, while Mar Dénia tried to control the ball and elaborated much more on their plays. 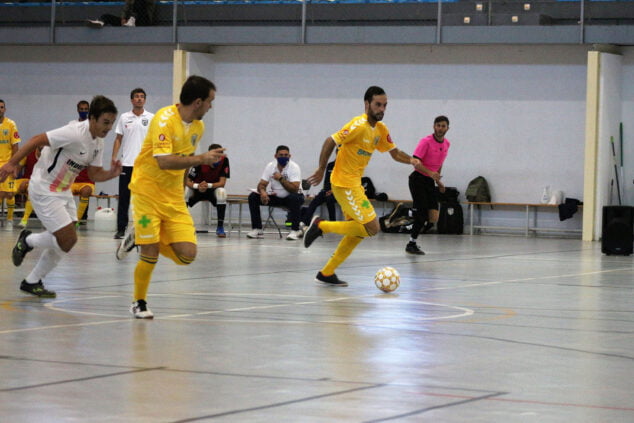 In the 7th minute, after a quick counter on the left wing, Adrià made it 0-1. The locals had their chances but they couldn't hit the target. In the 14th minute, again Adrià increased the difference, marking the 0-2, although a minute later it was Omar who, after a strong outside shot from Blai that the goalkeeper could not block, picked up the rebound and scored the 1-2.

Mar Dénia turned into the rival goal and, moments later, Nico was the target of a clear penalty that the referee couple incomprehensibly took out on the edge of the area. With the result of 1-2 it was arrived at the rest of the party.

The second half was more of the same and with a high rhythm of the game, the chances were succeeded in both goals, although it was again the visiting player Adrià who in the 26th minute managed to score 1-3, a goal quickly answered since in the minute 27 Omar made it 2-3, after a strong outside shot.

Mar Dénia enjoyed their best minutes on the field, but the lack of success in the face of goal hampered the result. With 4 minutes remaining, the Dianense coach Emilio Monfort He took a risk and put the goalkeeper player on the court, but two minutes later the final blow came, when the refereeing pair inexplicably punished the local team with a penalty, for a defense of Curro over a rival in an aerial ball, which meant 2- 4 and totally took the Dianense squad out of their boxes, who saw all the effort made disappear and that led to the expulsion of Omar for a double warning, in addition to several warnings to other players. The Catalan team took advantage of the superiority in the last minute of the game, getting the final 2-5 with which it reached the end of the game.

Next week, the Dianense team will travel to the town of Sabadell, to face the Club Natació Sabadell.

Marta García, born in Dénia, will share a paddock with Formula 1 driving in the W Series
13 November 2020
Leave a comment