Ovidi Montllor sang in Les meues vacances: “Tot ben senzill i ben merry. Em creureu mort. Jo no hauré mort. Faré vacances! ". Now, when 25 years have passed since the singer-songwriter and actor from Alcoy went on vacation, the Antoni Miró Chair of Contemporary Art at the UA has promoted the traveling exhibition Vinticinc vacances to Ovidi Montllor in memory and homage of the author. In its tour of the Valencian Central Regions, the sample has already visited Alcoy, Gandia and Ontinyent, and now, from February 16, 2021 to April 5, it will be installed in Dénia.

The curator of the exhibition, Carme Jorques, explains that works by twenty-five artists have been brought together, in balance -12 men, 12 women and a group, Matèrics- emerging or with a long history, of different styles, but all linked in various ways with Ovidi.

In the works, which will be distributed in the exhibition spaces of the Center d'Art L'Estacio and the House of Culture, “We see the inspiration not only from his poems, but also from his poets, which are ours, Vicent Andrés Estellés, Martí and Pol, Salvat Papasseit, Salvador Espriu, Joan Brossa, Pere Quart, Josep Maria de Sagarra, Blai Bonet ... and we will be able to appreciate the dialogue between the plastic, the word and the feeling; the influence of his combative, nonconformist attitude, but above all, the certainty that his profound legacy, "canyer"permeates our art and it is through art that tenderness, sensitivity become a weapon of construction and reflection ...says Jorques. 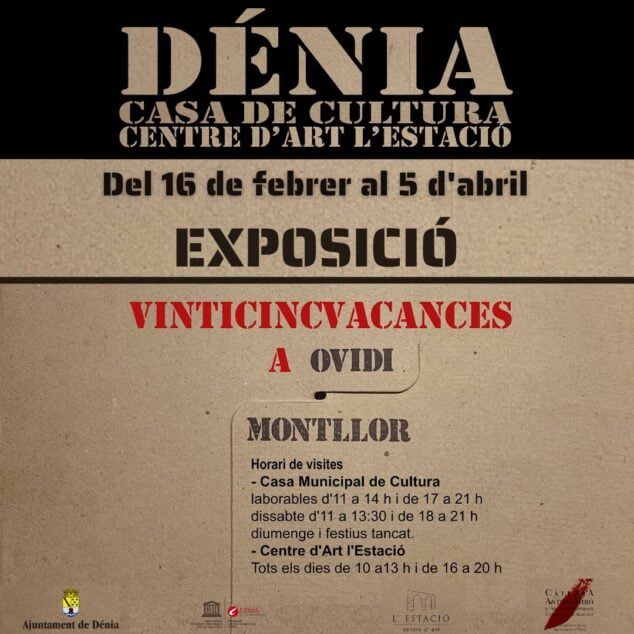