The Football Federation of the Valencian Community, through the National School of Coaches, calls the Federative Futsal Monitor Online Course.

Registrations are open until April 17 and the course will begin on the 20th of the same month and will last until May 31. The Escola d'Entrenadors of the FFCV organizes this course that will have a teaching load of 65 hours. In the following link you will find all the information and the way to register for the course: https://ffcv.es/wp/blog/2020/03/31/nuevo-curso-online-de-monitor-de-futbol-sala. 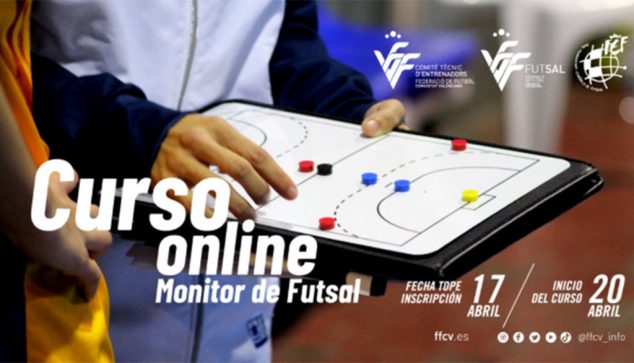 Recognition of the Degree

In accordance with the provisions of the Eighth Additional Provision of the Royal Decree
1363/2007, the Royal Spanish Football Federation states that all the training described in the previous sections has a unique and exclusive recognition by UEFA (within the framework of the UEFA Convention on Technical Qualifications) with all the consequences that at the level participation in official competitions recognized by FIFA and UEFA and international mobility entails being part of these structures as a member of them.

In this sense, it should be pointed out that UEFA and FIFA only recognize the RFEF as the only competent entity in Spain to carry out such training without any entity not attached or recognized by the RFEF being able to offer such Diplomas and Licenses with international validity. provided for in the UEFA Convention on Technical Qualifications.

In compliance with Additional Provision Eight section 4 of Royal Decree 1363/2007, of October 24, which establishes the general organization of sports education under a special regime, it is reported that the studies that are taught and the diplomas or certificates that are issued do not have the official character.

The course is online, so it is not affected by the confinement decreed by the Government of Spain with the state of alarm. Taking advantage of this rest period due to the COVID-19 crisis, there are many first-row players who take the opportunity to take this course online, Carlos Ortiz serving as an example, closing the Inter Movistar team and the Spanish Futsal Selection.