The Massma, City Council, Local Police and Civil Guard put an end to a point of sale of drugs that supplied minors

The Civil Guard of Alacant, in a joint action with the Local Administration of Xaló, has dismantled an important retail drug point of sale, established in a house in the town, which supplied minors in the area, causing great concern local. 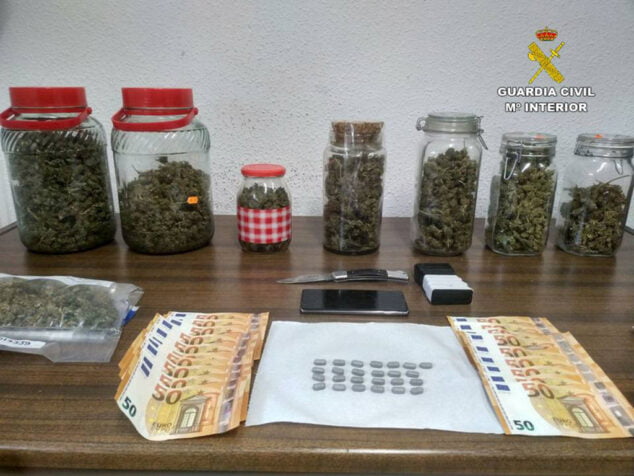 Drugs and money seized from detainees

During the course of the investigations, the Civil Guard agents have carried out in-depth social awareness work among the young people affected.

Throughout 2020, a significant increase in the sale and consumption of narcotic substances among the young population was detected in the town of Xaló. Civil Guard agents observed an increase in proposals for administrative sanctions to Organic Law 4/2015, on the Protection of Citizen Security. At the same time, the local administrative authorities, prompted in part by the complaints of the parents themselves from the affected sector, initiated actions aimed at addressing the problem. This revealed the social concern among the neighbors.

The Mancomunidad de Servicios Sociales de la Marina Alta (MASSMA), prepared a meticulous study that reflected the situation: a relevant percentage of the population, between 12 and 16 years old, was starting to use cannabis.

The onset of drug use in adolescence carries the added risk that it affects the physical development of the person who, in addition, is at a time of important cognitive, emotional and social changes. This premature consumption may bring the consumer consequences for life, and serious risks such as developing mental disorders, among others. On the other hand, more often than not, it will establish a pattern of behavior that will be much more difficult to eradicate in adulthood.

In addition, the studies reveal a direct relationship between the consumption of narcotic substances in this sector of the population, and the social and family conflict with their environment, as well as their disruptive behaviors.

The Civil Guard of Xaló then began an investigation with the aim of eradicating the possible cause. After a laborious work of documentation and analysis, the agents were able to verify that, indeed, in a neighborhood of the town, young people between 14 and 17 years old met frequently and daily to acquire and consume this type of substance.

In a first action, at the end of September 2020, the Civil Guard, in coordination with the Local Police, intervened in a flat in a neighborhood of Xaló almost 150 grams of marijuana buds, already dry and prepared for distribution and consumption, as well as various tools for weighing and selling the substance.

Shortly after, the Civil Guard agents located the main targets of this operation. Starting then an arduous investigation to identify them fully and find their whereabouts, since one of those implicated even fled outside the town after the seizure of marijuana carried out by force in September.

It was then that the agents found a new address, from which the alleged perpetrators prepared the doses that they distributed to minors.

They established a relationship of false trust with their buyers, in which, later, they took advantage of a situation of power based on being the oldest authors, thus ensuring that buyers traveled to the point of sale, located inside a flat, in a neighborhood of the town, without giving away the sellers, for fear of the possible consequences.

The authors transported the marijuana in their own tourism to this address, where they later peeled the marijuana stalks, weighed the doses and prepared the buds in the bags they used for distribution.

Once the Civil Guard of Xaló had sufficient evidence, with the support of the Benissa and Moraira Posts and the Cynological Service of the Alicante Command, they conducted a search in the house they used as a point of sale, locating 750 inside grams of marijuana buds, 25 ecstasy pills, 1.000 euros in fractions of small bills and a taser-type electric gun.

Three people have been arrested: two male brothers aged 20 and 24; and a minor, 16 years old, a sentimental partner of one of the brothers, who collaborated with them in hiding the drug and selling it.

They are charged with a crime of drug trafficking, and another of drug cultivation or manufacture. After being made available to the Dénia Investigating Court, they have been released with charges.

The Civil Guard has thus managed to dismantle an important retail point of sale of narcotic substances, established in a neighborhood in the town of Xaló, whose usual clientele were minors from that population.