Between the Balearic Islands and the Denia coast is an area of ​​great importance for the second largest animal on the planet, the fin whale. A whale of more than 20 meters in length. But, in addition, a great diversity of other cetaceans live and feed in this area such as the sperm whale, bottlenose dolphin, striped dolphin, common dolphin and deep-diving species such as the gray pothead, the black pothead or Cuvier's beaked whale.

The new exhibition that is being held at the Casa de la Marquesa Valero de Palma until January 31 shows the history of the creation of this protected area (the size of Aragon), the species that live in it, the studies that are being carried out by from the University of Valencia and the threats suffered by cetaceans, mainly due to fishing interactions and maritime traffic. 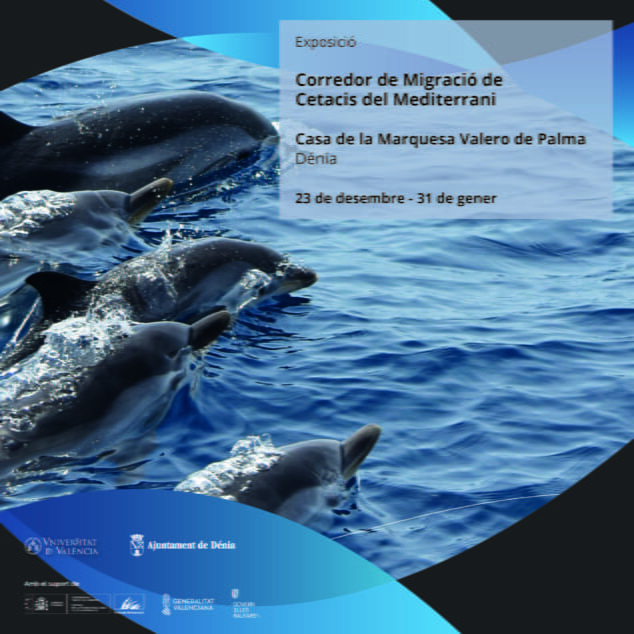 The University of Valencia, the organizing entity of this exhibition with the support of the Biodiversity Foundation of the Ministry for the Ecological Transition and the Demographic Challenge, has chosen Dénia as one of the places that the exhibition will visit so that the marine area of ​​this municipality is a benchmark in marine conservation in the Mediterranean and one of the areas with the most fin whale sightings on the Valencian coast.

Councilor for Culture of the Denia City Council, Raúl García de la Reina, has highlighted that the Casa de la Marquesa Valero de Palma "is a space open to everyone, which is disseminating and offering its use so that anyone can learn about the environmental values ​​of our sea, which is one of the socioeconomic and cultural pillars of Dénia".

On the other hand, the professor of the University of Valencia, Toni Raga, has highlighted "the importance of this type of exhibition that shows the treasures of the sea of ​​Dénia and the Valencian Community and how the promotion of citizenship is key to the protection and regeneration of our marine environment”.

The Mediterranean Sea is home to countless species, including populations of whales and dolphins, some of which are threatened. Precisely between the coast of the Valencian Community, Catalonia and the Balearic Islands is a migratory transit area for the second largest animal on the planet, the fin whale. But not only that, it is also a habitat and feeding area for a great diversity of other cetaceans (sperm whale, bottlenose dolphin, striped dolphin, common dolphin and deep-diving species such as the Risso's pilot whale, the common pilot whale and Cuvier's beaked whale). .

But in this area, so interesting for these emblematic animals, it was threatened by the possibility of developing oil platforms in it. Citizen mobilization and political action ended up dismissing these hydrocarbon extraction plans and in 2018 this area was declared a Marine Protected Area and a Specially Protected Area of ​​Importance in the Mediterranean).

The latter has been a milestone for Spain in terms of marine protection. With this declaration, Spain has exceeded the goal of reaching 10% of protected marine waters set by the United Nations Convention on Biological Diversity for 2020, and is now close to 13%. The cetacean corridor is a continuous strip of maritime waters, with a surface area of ​​46.385 km2 and an average width of 85 km, which runs between the Catalan and Valencian coasts and the Balearic archipelago, a marine area of ​​vital importance for the survival of cetaceans in the Western Mediterranean.

This exhibition is about all this, which is part of the project 'Evaluation and main threats of cetacean populations in the south of the Mediterranean Cetacean Migration Corridor', for the management of the Corridor of the Marine Zoology Unit of the University of Valencia, with the support of the Ministry for the Ecological Transition and the Demographic Challenge, through the Biodiversity Foundation. This work has focused on studying the main threats in this area for cetaceans, which have been accidental fishing and marine traffic. The results of this study will be sent to the competent administrations to design the management of this space of great importance in our Mediterranean.

The dossier of the exhibition can be consulted in this document: General COMICET dossier

The writer from Dénia Antonio Villar presents his book «Fascismo; A synthesis of the myth of the two Spains?»
19 January 2023
Leave a comment

37.861
4.450
12.913
2.480
We use cookies necessary for navigation and traffic analysis. We do not use cookies that provide us with personal data or advertising cookies.
More optionsACCEPT
Manage consents