Juan Bernardo Pineda shows us his evolution as an artist, starting from a first phase as a modern dancer and choreographer that leads him to investigate arriving on a path of no return to see that his choreography lasted 15 seconds or less, but his surprise jumps when that work ("Stairs") they recognize it by buying it on Reina Sofia and IVAM... to his surprise and as a sign that art runs through paths of madness and conceptual artists made such trash in the choreographic theme that his was cinnamon. This leads him to enroll in Fine Arts and investigate the cinematic language. 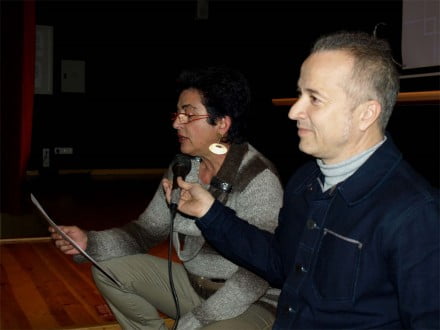 We showed a very closely the evolution over time and the importance of choreography and cinematic means of delivery. This evolution leads us to the film Matrix where the different evolutions are summarized (which he revealed to us through film videos throughout history) and the connection between the choreography of the body and violence. In it, the choreography in space is combined with the camera movements and a subsequent montage in the laboratory.

All this evolution is shown at all times as a support to show violence.

This is where Juan Bernardo rebels, and his quest is to move away from the intersection of choreography and violence to take advantage of cinematic techniques used by them to look more artistic and roads away from it.

The event ended with a pooling of ideas on the matter with the few attending public and this alibi, for the closing time of the culture classroom.

I will make two reflections about this act: One, that the approach of eliminating violence from art is everyone's task and begins with attending the artistic events that are offered to us. And the second, that I recommend trying to see Juan Bernardo when the occasion arises as well as his current cinematographic work recognized worldwide and that, despite technical unforeseen events, we were able to savor with a short film showing.

The art is to enjoy it, I just want to generate interest for it, but criticism does not serve me because everyone felt differently and each art comes to us in a special way and everyone valued in terms of what it generates . So Be at and valorad, which depending on the number of people who enjoy art, less violence and more personal satisfaction will be.