Josele Maldonado, president of the Association of Moors and Christians de Dénia met with the presidents of the AMMICC to, in addition to thanking them for their work, to gather enough information so that the party can be declared Fiesta of Regional Tourist Interest. 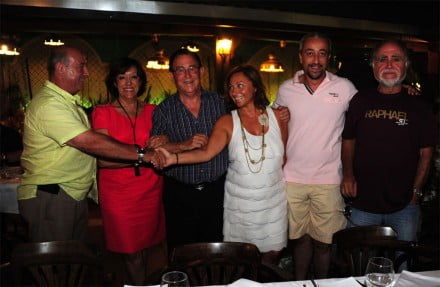 In the case of obtaining such distinction, granted by the Ministry of Tourism, the Moors and Christians in Dénia in honor of Sant Roc they would be included in the promotional circuit in Valencia. To get it, parties must meet certain requirements as the promotion of participation and the integration of society, influx of visitors and tourists, conservation of the values ​​of coexistence and promotion of cultural historical values ​​both in the Community and beyond, values ​​that, according to Josele Maldonado, the party more than meets

This dinner meeting of presidents, Vicente Maldonado wanted to thank Crespo, José Antonio Sánchez, María Jesús Monfort, Julian Pérez and Amparo Mata work and dedication over the years who held office. The dinner was also attended by the 2011 charges, the crier and all those who collaborate with the party.