Dénia will once again become the benchmark for regional, national and international theater between the 1 and the 15 in June, when the city hosts the 29 Mostra de Teatre Ciutat de Dénia, that this year will receive groups from Dénia, El Verger, El Campello, Albalat dels Sorells, Buenos Aires (Argentina), and Lobñya (Russia).

For its twenty-ninth edition, the Mostra de Teatre will give special prominence to Russian speaking theater, since its main novelty is the incorporation of the I Children's Theater Show in Russian which is celebrated in Spanish territory. 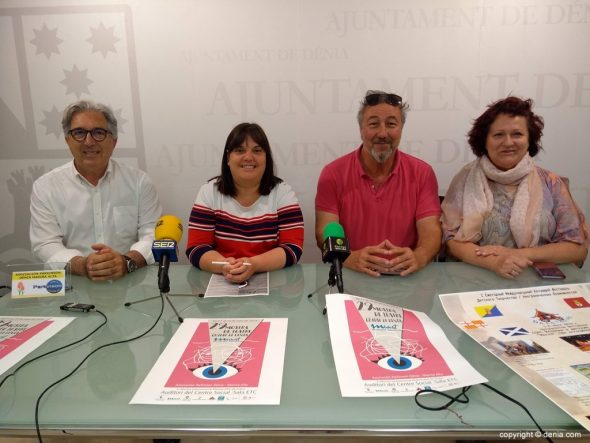 Thus, from 1 to 4 in June, the ETC Room of the Llunàtics building (Ronda Murallas, 42) will host children's theater groups from Tenerife, Sant Joan d'Alacant, Barcelona, ​​Valencia and Gran Canaria that will represent different works, all in Russian, as a sign of the internationalization of the theater that is being lived in Dénia. In addition, during those days, complementary training activities aimed at theater lovers will follow.

The director of the Mostra Infantil, Svetlana Kartounova, explained that, from the 1 day, in the mornings, the participants in the program of this show will parade through the streets of the center of Dénia to encourage neighbors to attend the performances.

On Thursday, 6 in June, will officially start the 29 Ciutat de Teatre Mostra de Dénia, with seven theater sessions that will take place in the Social Center of Dénia, as explained by its director, Mario Passero.

The first to take the stage, the Thursday, 6, will be the actors and actresses of Tremenduskas productions, of Dénia, with the comedy of collective creation Suspicion, directed by Antuan Díaz.

El Friday, 7 day it will be the turn of the ETC of El Verger, representing Emperor, a black collective comedy directed by Antonia Herreros.

The following ones on the stage, the Saturday June 8, will be the components of Almadraba Theater, from El Campello, with the comedy of collective creation 24F, directed by Diego Juan.

El Sunday, June 9, the company of Albalat dels Sorells (València) Quatre Stres, will interpret the comic drama of Juan Carlos Rubio The Wounds of the Wind, directed by Amparo Vayá.

The Mostra de Teatre will resume the performances on Thursday, June 13, with the Argentine company Lighthouse, that comes from Buenos Aires to represent Mrs. Macbeth, by Giselda Gambaro, directed by Osvaldo Peluffo.

El Friday, June 14, the Russians of Kamernaya Scena will represent Wardrobe, or what women hide, a work written and directed by Dimitriy Sarvini.

The closure of the Mostra and awards ceremony will be the Saturday, 15 for June, and will be enlivened by the group Curiosity / ETC Classroom and the collective creation Knock Mela. That night the prizes will be awarded to the best director, best actor and actress, a prize for the use of Valencian and a prize for the best work, chosen by the public. In addition, as usual in these cases, special mentions will be given in the form of thanks from the organization.

This year, the collection of the Mostra de Teatre will go to the association Párkinson Dénia-Marina Alta, which is chaired by Pablo Segarra. This association, created five years ago, serves 512 people throughout the region from its headquarters in Dénia.

Tickets for the Mostra can be purchased at the box office of the Social Center auditorium, from 2 hours before each function. The general admission price will be 5 euros, and tickets will be offered for 3 euros for retirees and holders of the Jove card.