On March 10, 2020, at the Ordinary and Electoral General Assembly of Jovempa Marina Alta, held at the Hotel Nou Roma, José Alberto Notario Brox was appointed as president for the 2020/2022 candidacy. 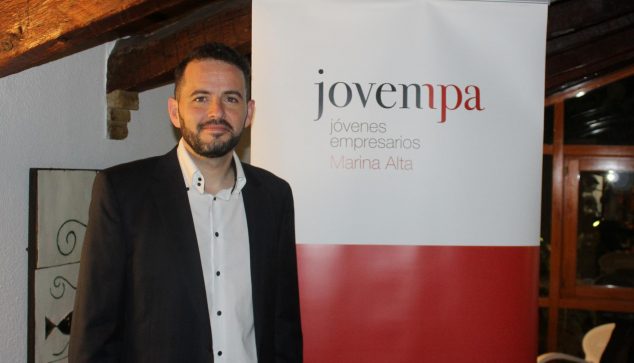 José Alberto Notario Brox, has been in the last candidacy as a member of the Board of Directors of Jovempa Marina Alta accompanying and supporting José Antonio Bas Llopis who is now succeeding.

The first words after taking office were for his predecessor José Antonio Bas Llopis, whom he thanked for his effort and dedication to the association during these two years.

He also wanted to thank Carolina Vallés for supporting him in his candidacy as vice president, as well as the rest of the additions to the new board of directors, since he knows the effort involved and is pleased with the great motivation with which they face this candidacy.

He himself is very excited about new projects, a commitment to reach more towns in the region and even incorporating new members to the board of directors to have greater regional representation.

Also continue with the organization, started by José A. Bas, of recovering the regional awards on the occasion of the X Anniversary of Jovempa Marina Alta for this year. All this for the support and growth of the business community in our region.

José Alberto Notario Brox, 39, is an Architect from ETSA in Valencia with specialties in Building and Urbanism, he completed the Master of Advanced Architecture, Landscaping, Urbanism and Design (MAAPUD) in addition to being specialized in BIM Methodology.

Currently, he works as an architect with Estefanía Benavent Alberola, his wife, in the n + b arquitectura office. As a team they manage comprehensive construction projects such as Project Management at the Grup 4Tonda company, in Denia.

José Alberto Notario, did not want to finish without thanking the assistance of David Santiago, president of Jovempa Federación and all the associates who accompanied him.

Opinion of Vicent Martín, technician of the Office of Innovation: «The validity of a local project with raons globals»
June 03 2020

In the month of May, discharges have increased by 78% and the number of patients hospitalized and in the ICU has decreased more than 80%
June 03 2020