COMMITTED TO SPREADING THE FOLKLORE OF LA MANCHA CASTILLA

The dance group Al-Manchara was founded two years ago within the Original House of Castilla La Mancha of Denia, with the aim of promoting and disseminating regional dances Mancha region. The group, led by Professor Obdulia Marchante, is made up of about thirty people with an average age of fifty. 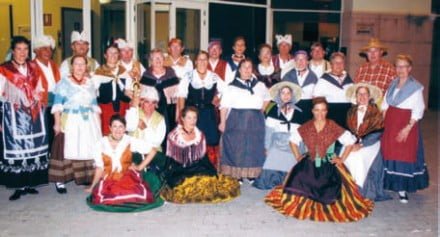 Obdulia Marchante took over Al-Manchara in 2007 "because since childhood I like regional dances, my grandparents and my parents were already part of a dance group. I was asked to start classes and gladly accepted because apart from that I am Manchego, made me really happy, in honor of my parents and our land. " O. Marchante is also a member of group Dianium Dansa and teaches valencianas regional dances in schools Dénia.

The formation of the group was started from the basic level, the teacher explains: "At first it took some because regional dances have a structure, a few steps and rhythms determined to be learned". Of his students, Obdulia Marchante stresses that "are people with a lot of enthusiasm, they have never missed classes in two years, I enjoy a lot with them, to see the commitment and the sacrifices they make, it is very rewarding."

Among the concerns of the teacher, she is the formation of a children's group, "although I know it's hard, because children have many activities, but I think that with commitment we will get, there are grandparents and parents to give a jog".

Obdulia Marchante also highlights the effort and interest group members to regain the traditional Manchego clothing. The costumes that look in their performances correspond to the dress of the eighteenth and nineteenth centuries. The costumes are designed in Albacete by Alberto Montesinos, prestigious indumentarista and folklorist and supplements have been purchased in the municipalities where they were originally concocted, like Montera leading men in the dance of the clubs, which is the Bonillo in Ossa de Montiel.

The current repertoire of dances Al- Manchara includes, among others, pastors dancing or dancing clubs and several seguidillas. Obdulia Marchante says they are preparing a mixture of fandangos and seguidillas and will soon continue with Malaga and Ronda. Within the group there are three components that accompany his voice a few pieces, including Gerardo Naranjo, as rondeñas, jacks, songs or threshing tillage. Al-Manchara not have its own Rondalla, but on numerous occasions has danced with the Rondalla of the House of Castilla La Mancha in Benidorm.

Al Manchara is a very active formation, which through the Regional House, participates in all kinds of cultural, charitable and institutional events. José Muñoz, president of the House of Castilla La Mancha, which brings together 730 partners from Castilla La Mancha, Dénia, Murcia and also foreigners, says that "we collaborate in everything they propose, we are always with the people, and always that we can promote Dénia ".

Among the latest actions of Al-Manchara is the one made last October at the Social Center during the cultural week organized by the Home of Pensioners and Retirees of Denia and the town of Tiriez (Albacete) on the occasion of the festivities in honor of the Virgen del Rosario. This was the first performance of Al-Manchara out of Denia and public reception was fantastic, as we commented José Muñoz and Obdulia Marchante.