Grimalt responds to the neighbors: "My fear is that we will arrive in early summer"

The Mayor of Dénia, Vicent Grimalt, has appeared through a very grateful live broadcast to answer all the neighbors' questions about the situation. For more than an hour, having concluded just minutes ago, the mayor has answered questions that sent him in real time to his Facebook page. 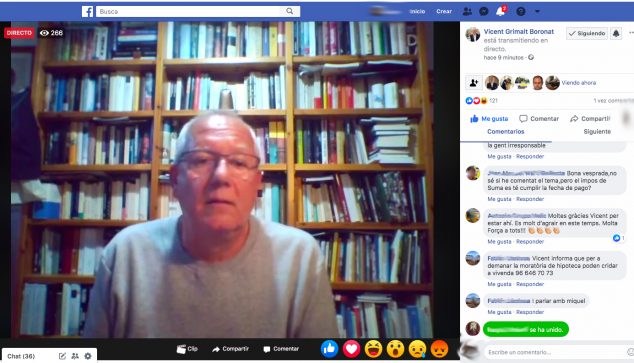 Vicent Grimalt answers the doubts of the neighbors through Facebook

Among the biggest concerns of the people are the number of infections that Dénia has and the infractions of the neighbors who break the quarantine. Regarding the latter, Grimalt has admitted that he continues to see too many people on the street but assures that the police are being strict with the subject, without making distinctions of any kind.

Regarding the first question, the mayor has insisted that these data are not controlled by the City Council since they have no jurisdiction in the hospital, being a matter for the manager and the Ministry of Health. In addition, he stressed that knowing them or not does not change anything, although what they transfer from the hospital is that we have a low rate compared to other points in the community, pointing out that "fear-mongering is not good for anyone".

In addition, many neighbors have been interested in how Grimalt personally lives it, which has replied that "I really want to be able to return to the City Hall and work with all my colleagues". Similarly, he has stated that his greatest fear is "that we arrive in early summer and tourism suffers", although he hopes not. "If everything goes well and the summer can be saved it will be a situation, if there is no need to take action"added the mayor.

After this long open online question and answer session, in which different councilors of the team have also participated, Grimalt has promised, seeing the good reception, that they would repeat every Wednesday until the situation improved.

The first and most loyal tourists return: the fin whales
May 27 2020