The track of athletics of Elche was the scene of the Provincial Championship of Combined Tests in infantile category and cadet. A competition in which the Athletics Club Baleària Diànium had the participation of 14 athletes. So far, the maximum presence of representatives of the Dianense club.

The children completed a tetralón, with the 60 meter hurdles, shot put, long jump and 60 smooth meters. The best of the dianenses was Erika Miralles who occupied the seventh place with a final score of 1101 points. Adriana Femenía occupied the 18ª position with 889 points. María Berruti was 19ª with 814; Lucía Palacios 20ª with 800 and Paula Femenía, 24ª with 658 points. 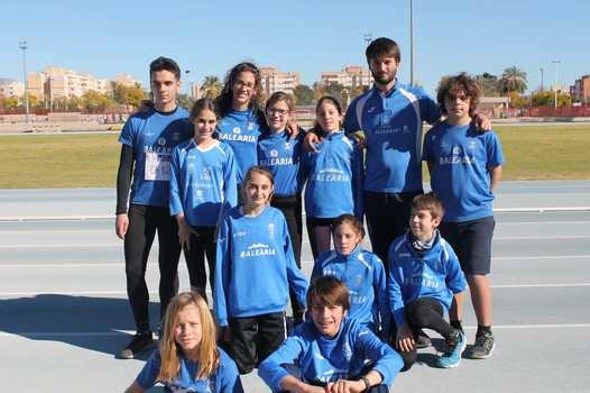 The cadets completed a Pentathlon with the same tests as the children's ones. The best of the Athletics Club Baleària Diànium was Aitana Requejo, who finished 22ª with 1.595 points. Blanca González was 38ª with 1.111 points, Elsa Escobar finished in the 39ª position with 1.098 points and Marta Vives, was 41ª with 889 points.

The cadet athletes completed a Hexatlón, with the 60 meter flat tests, long jump, shot put, high jump, 60 meters hurdles and 1.000 smooth meters. The tests were spread over two days. Pau Flores was the only Dianense representative and finished in seventh place with a final score of 2.220 points.

From the Athletics Club Baleària Diànium consider it a success to have competed with so many representatives in this Combined Events Championship, as it is one of the most complete.