Fallas, Moors and Christians and the patron saint festivities will return more INCLUSIVE

The festive environment is another of the pillars of the City Council's roadmap in terms of inclusion, as announced by the Councilor for Equality, Javier Scottoin the press conference this morning. The motion that will pass unanimously this afternoon the ordinary plenary session establishes the need to promote inclusion and diversity in the main festivals of Dénia, La Xara and Jesús Pobre. 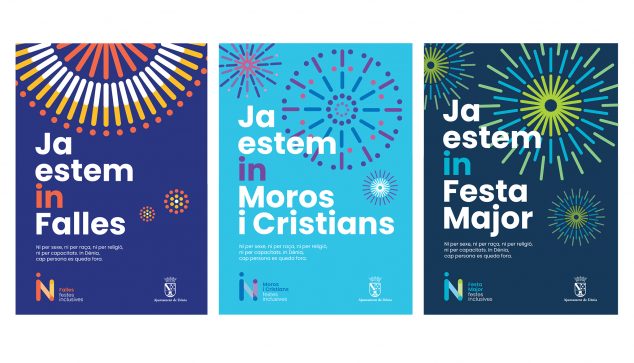 This objective has materialized in a campaign presented by Scotto in the company of the Councilor for Festivals, Óscar Mengual, and the representatives of the main festivals in the city: Juan Salvador Pérez Llopis, President of the Local Board Fallera; Bernardo Hernández, member of the Fiestas Commission, representing the Festa Major, and Amparo Mata, member of the board of the Federation of Moors and Christians (FEMMICC) from Dénia.

The inclusive party campaign uses the IN logo, the first part of the word “inclusive” and the English word in general use of our language which means “in”, to express the feeling of “being within” our parties without any type of discrimination. It is also played with the colors that most identify each of the parties and with geometric shapes, creating designs that interpret the union, complicity and community.

So, when these celebrations return to the annual calendar, we can see the messages "Ja estem in Falles", "Ja estem in Moros i Cristians" and "Ja estem in Festa Major" followed by the text “Neither by sex, nor by race, nor by religion, nor by abilities. In Denia, no person is left out ”.

All a declaration of intent that adds to popular festivals "The egalitarian, diverse and inclusive perspective", in the words of Scotto. It is more than a campaign, as Councilor Fiestas, Óscar Mengual, has indicated. "Is to believe that diversity and equality must always be there".