Unemployment continues to decline in the Marina Alta, with 780 the number of people who have found employment between March and April. Currently the total number of unemployed in the region is 13.352. A considerable drop compared to the previous month (-5,52%), although there are still 2.364 more unemployed than before the crisis (+ 21,51% compared to February '20). 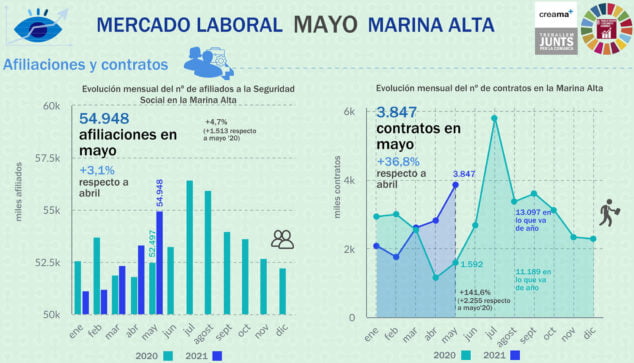 Affiliations and contracts in the Marina Alta in May 2021

The number of affiliates to Social Security in May, has increased by 1.633 affiliates, reaching 54.948 affiliates, which translates into an increase of 3,06%.

The month of May has a positive behavior in employment. If we compare with the same month of previous years, the best employment record can be confirmed, typical of the bonanza in own employment this month. May is one of the best months in terms of membership and unemployment. Membership has increased much more than in 2020.

Regarding the interannual variation of affiliates, an increase in affiliation in May 2021 with respect to May of last year stands out, which translates into a growth in affiliation of 4,67%. In May 2020, the decrease in affiliation with respect to May '19 was -5,6%, the same happened with the successive months comparing them with the equivalent of the previous year, until the year of the pandemic course is not entered. can speak in positive terms of the variation in membership and it is this month of May 2021 when the best behavior in membership occurs. 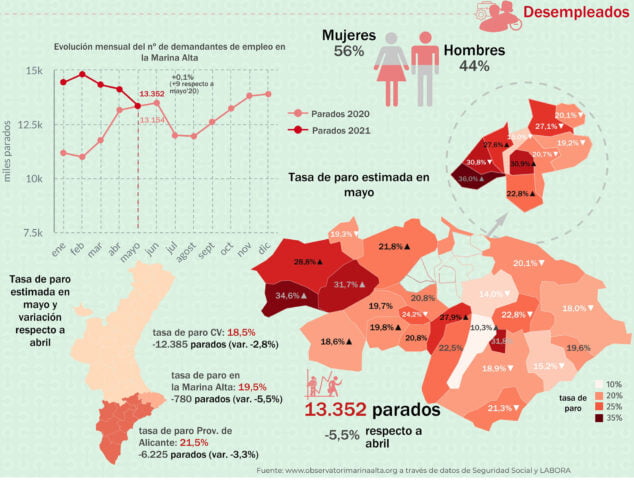 Unemployed in May 2021 in the Marina Alta

By sectors, job creation has been practically generalized in the month of May, there are no drops in membership in any sector during this month with the exception of Agriculture, which in relative terms falls 3,64% compared to the previous month, reaching the 423 affiliates. The largest increases in affiliation in absolute terms have been in The General Regime, where the majority of employed persons contribute, recover 1.419 affiliates and added a total of 35.153 contributors in May, 4,21% more than in April 2021 .

Regarding the number of unemployed, the month of May has been a good month for registered unemployment in the Marina Alta. Unemployment has fallen by 780 people compared to April (-5,52%), reaching a total of 13.352. It has been the most important decrease in the number of unemployed in the month of May in the last 10 years. Therefore, we are facing a behavior with an adequate sign, but in terms of still photos, it must be taken into account that this figure of 13.352 unemployed must be absorbed, because before the crisis, we were around 10.990 unemployed (February '20) and with values ​​during this month very similar to those found in May of last year (13.343 unemployed in May 2020). Despite the fact that there is a considerable drop in the number of unemployed compared to April, its value continues to be on par with what it was a year ago, registered unemployment grew by 9 people in the last year, this annual growth represents an increase in terms 0,1% year-on-year (compared to May '20).

However, if we look at year-on-year rates and compare the figures for this month of May 2021 with May 2020, the data varies. Again, the Agriculture sector is the most affected, with an increase in the number of unemployed by 15,22% (+35 people), Construction and Services decrease their number of unemployed by 3,70% (-58 people), and 0,89% (-92 people) respectively, and Industry is practically the same, an increase of 0,34% (+2 people).

Again, as in previous analyzes of the labor market, it is necessary to know the evolution of the total number of ERTEs and thereby recognize the so-called “effective affiliation” -not all the people listed as affiliated to social security are effectively working- and to This must know the population in ERTE.

In the month of May, no temporary employment regulation file has been added in the Marina Alta, which means that it remains at the 3.776 ERTE requested since the start of the pandemic, which have affected around 15.615 affiliates. It is important to highlight that in the face of the economic crisis derived from the covid-19, 20 companies have requested ERE, with the consequent closure of the activity, which has caused more than 100 people (103) to permanently cease their employment relationship with the business.

Regarding contracts, they provide us with an accurate approach to the dynamics of the labor market in terms of the creation or not of opportunities, especially for people who are unemployed. In May, 488 permanent contracts and 3.359 temporary contracts were signed. There are very important increases in year-on-year terms, so if we compare with May 2020, the number of permanent and temporary contracts practically doubles (increases of 105,04% and 148,08% respectively), but it is still far from the months May prior to the crisis (526 permanent and 3.985 temporary in May '19).

Compared to the previous month, the increase in hiring has been 36,76% or what is the same, 1.034 more contracts than in April 2021. Special mention of the fact that permanent hiring has fallen by 8,27% in the last month in favor of temporary hiring, which has grown by 47,26% compared to April. Although the differences in the variation of contracts by sex are minimal compared to the month of April, the number of contracts signed during the month of May has been in favor of men by 51,29% and 48,71% for women .