The historian Dianense Roc Chabas (1844-1912) author, among other works, History of the city of DeniaIn addition to devote himself to study and archives, we know that too fond of good food and good desserts.

Among chabas documentation preserved in the Municipal Archives, from donations from chabas sisters and Zalbidea donation, we find a recipe for a good sweet dessert: pudding "polit".

The pudding should be popular among the wealthy families of Denia in the late nineteenth century and early twentieth century by the influence of the British, who needed to buy passes from the Navy to develop home traditional puddings, Christmas essential.

Chabas pudding is especially rich in ingredients: calabazate, almonds, raisins ... hence its name pudin "polit". Prepare this pudding at Christmas is a reunion with the sweetest Dianense past. Here is the transcript of the recipe equivalents and current measurements. 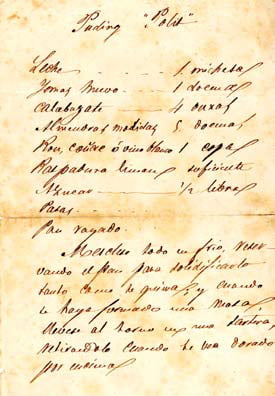 Mix everything cold, reserving the pan to solidify as much as you like, and when a dough has formed, take baked in a pie plate, removing it when you see browned on top.