The President of the Generalitat, Alberto Fabra, inaugurated the Maritime Station Dénia

La Maritime station of Dénia has been inaugurated this morning by the President of the Generalitat, Alberto Fabra, in a ceremony that has brought together a large number of regional, provincial and local personalities, such as the Minister of Infrastructure, Territory and the Environment, Isabel Bonig, the Mayor of Dénia, Ana Kringe, and the general director of the Merchant Navy, Rafael Rodríguez, among other personalities.

During the opening ceremony, the group president Baleària, Adolfo Utor, has highlighted the "economic effort made in the current times to make the new facilities a reality" since Baleària it has had to invest more than 2 million euros in the works of exterior urbanization of the Moll de la Pansa and habilitation and interior conditioning of the offices.

The project consists of several phases of construction and, in this first one in which the Maritime Station is located, Balerària has to invest "another 3 million for the new access control and the redevelopment of its surroundings, the boarding bridge , the finger and all the premises ", according to Utor.

The public-private collaboration agreement between the Ministry of Infrastructures and the group Baleària estimated that the investment made by the Administration is 10,5 million euros, while the concessionaire must complete the works, which will amount to 9,5 million euros more when all the phases of the project have been completed.

THE MARITIME STATION
The complex covers a total of 54.845 square meters, of which 2.300 square meters correspond to the building of the Maritime Station itself and, the rest, to the three berths, fields, parking lots and adjacent surfaces.

In the new maritime station are located the central offices of the Baleària group, shipping company that will operate the duralte facility for the next 25 years through the Puerto Natura emrpesa.

The new building, which will offer all the necessary services for the transport of cargo and passengers, consists of a ground floor, where the ticket office will be located and an area for leisure and restoration, open to the entire population, the first floor, in which there are the offices and the upper floor, where the departure lounge will be located. 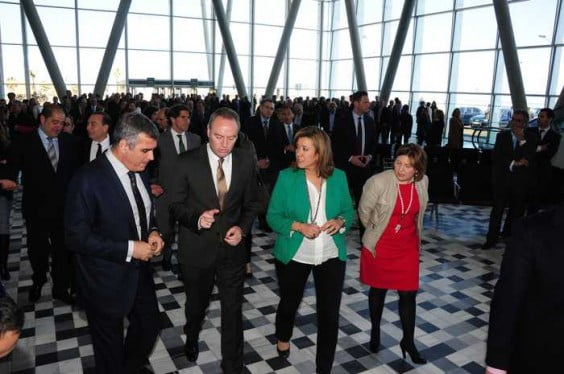 Among the services that the Maritime Station will have, there will be free Wi-Fi coverage, several restaurants, a pub, a parapharmacy, massage service and a playroom. A playground will be installed outside.

In addition, Adolfo Utor has also highlighted two innovative projects that are being studied: the Plaça de la Llum (a space for 21 microprojects for innovators) and the launch of a solar boat to connect the maritime station with the city center.