The Popular Party of Dénia met last week with the vice presidents of the Associations of Beaches Norte and Almadrava, Sebastián Alcaraz and Pere Cardona, together with Francisco García, representative of the beach of l'Estanyó.

In said meeting, the serious situation of our coasts was put on the table, generated mainly by the retention of sediments caused by the reservoirs and that generate the regression of our beaches in an exaggerated way.

People's spokesperson María Mut take the opportunity to thank the full collaboration of these three neighborhood representatives, to whom it is intended to give sufficient voice so that the political establishments become aware of the drastic consequences that are going to occur, on the one hand, if action is not taken once and for all with the release and replenishment of the sediments of our river basins on our coasts and on the other hand by the proposal to modify the Coastal regulations, which will affect not only private properties but also merchants and
hoteliers, and joins the neighborhood voices that from Dénia ask for its immediate stoppage. 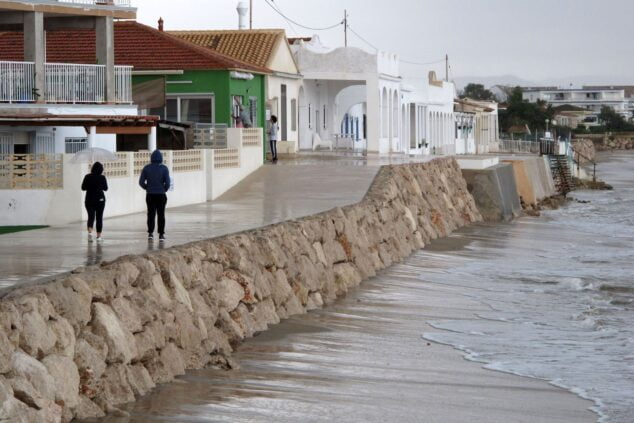 On the other hand, adds María Mut, “this modification supposes a total interference and an abuse of the private property of the properties that are in the demarcation area and that, for so many years, have been in the hands of individuals who have maintained them. and paid his taxes religiously. It is incredible that now they have taken out of the sleeve the possibility that all these goods pass into the public domain and that their owners begin to enjoy them only with a government concession.

Councilor José Antonio Cristóbal adds that “with this proposed modification, concessions and/or extensions will be prohibited when the works have a risk of being reached by the sea. And here in Denia there are many businesses and jobs that would be affected if this modification goes ahead.

Similarly the PP of Dénia denounces that in the proposed document, the references to the conservation or repair works of the works that remain within the terrestrial maritime domain or that the promenades themselves cease to be a fixed edge of the seashore are removed.

Eva Catalá urges that all political forces at the national level support a comprehensive reform of the articles of the Coastal Law that obliges the merchants that maintain and exploit our swamps, to replenish the sedimentary flows in the river basins and to transfer the sands from the reservoirs and ports to the beaches that require it.

To conclude, the popular spokesperson María Mut informs that the popular group has registered a motion to be dealt with in this February plenary session, and from which it expects the adhesion of the municipal groups, and in which the withdrawal of the reform of the Regulation of the Law of Coasts and as well as carrying out as many actions as necessary for the restoration of our beaches to the state in which they deserve. “We must not forget that we are a tourist municipality that sells its beaches as one of its main claims. approve this
Modification of the coastal regulations would mean that most of the properties and businesses of the Spanish coastal municipalities would become public domain”.