The legacy of Egino Weinert at the UNED Dénia

On February 19, the first talk of the course “The Legacy of Egino Weinert in Dénia” took place with the aim of publicizing the figure of this magnificent artist. 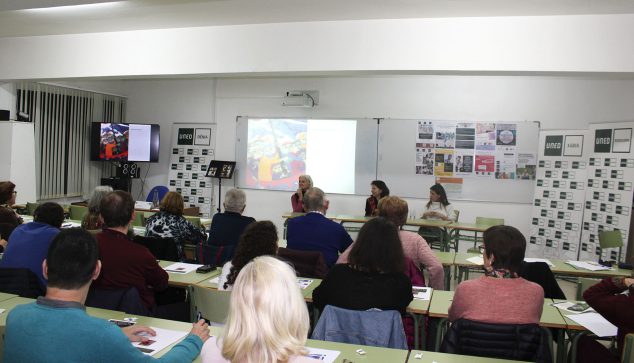 Egino Weinert (1920-2012) is one of the most prolific artists of the last century. Born in Berlin, he dedicated his whole life to the art of painting, sculpture and goldsmithing, leaving behind a broad and valuable legacy.

Egino Weinert arrived in Dénia in the 60s by Ella Brösch and established a workshop in the city, a city he will love and leave several of his works. 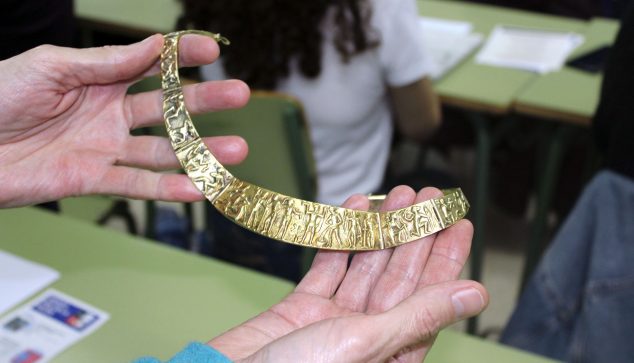 Goldsmith's piece of the artist

The course has been organized and taught by the CA UNED Dénia with the collaboration of the City Council of Dénia and consists of two talks, one focused on his biography, which took place on February 19 at the university center, and another focused on the technique, which took place on site visiting the Church of San Antonio on Sunday, March 1.

In the first talk on February 19, the table was chaired by Ms. Raquel Martí Signes, Director of the Center Associated to the UNED in Dénia; Ms Claudia Peter, Coordinator of the CUID of the CA UNED Dénia; Melani Ivars Rojas, Councilor for Education, Youth, Addiction Prevention and Transparency of the MI Dénia City Council; and Raúl García de la Reina Martínez, Councilor for Culture and Sports of the MI Dénia City Council. Also present at the event were Mª Ángeles Menéndez, Academic and Quality Coordinator; and José Salvador Monserrat Crespo, Legal Technical Manager of the center. 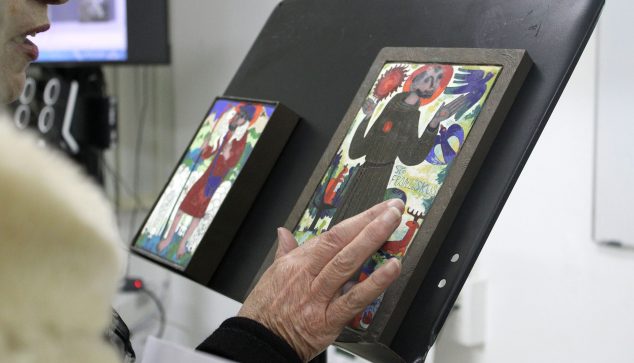 After the inauguration and welcome of the Director of the CA UNED Dénia and the intervention of the Councilor and Councilor of the City Council of Dénia, Claudia Peter presented in an entertaining and detailed way the biography of Egino Weinert, who was privileged to meet and interview in person, still in contact with his widow today.

Claudia Peter explained how Egino Weinert, for whom his works were to bring the human being to divinity, was imprisoned for refusing to perform the Nazi salute, sentenced to death in World War II, a sentence from which he was exempted by German defeat; mutilated by an electric shock that severed his hand; and falling into deep poverty during the postwar period, were not obstacles for him, who managed to create one of the most important jewelry workshops in Bonn and develop his sacred art over the years, until he became a renowned artist.

Claudia also spoke in detail about the Cross in the Church of San Antonio in Dénia, a cross that began as a prototype of another for the Vatican and that, after a good final prototype, was donated by Egino Weinert to the mentioned church. This cross today can be appreciated and visited, although its initial context of wide white and clear space was altered by a more baroque one changing that first original design of the artist.

Next, the “Style and work of Egino Weinert” conference was held by Jessica Agulles Conte, Tutor Professor at UNED Dénia, who presented her art, framed within sacred art and with multiple influences of German and medieval expressionist artists , art in which he takes up past techniques, based on inspiration and luminism, and that we can find in countless German and foreign churches, as well as in the Vatican collections.

At the end of the event there was a round table chaired by Claudia Peter and Jessica Agulles Conte, which was joined by Mireia Abarca Pérez, a friend of the Weinert family who stressed that “The small details of life, such as seeing a flower grow or see flying a bird, they were like a miracle to him. ”

It was a pleasant and interesting talk, full of details of his professional and personal life, making it clear that Egino Weinert, besides being a great artist, was a great person.