The youth team moved to Busot last Saturday to play a complicated and difficult match, as it is a rather slippery outdoor track. In addition, it is a rival that at home puts things very complicated to the teams that visit him. Even so, the dianenses won the 4-5 victory and remain leaders in the category with six wins in six games.

The match did not start well for dianenses who saw two cons, the home side went ahead with two goals. Jaime Moreno boys were getting used to the track and gradually began to impose their game. Just before the break and corner, they managed to close the gap with a goal from Alvaro and go to the locker room with 2-1. 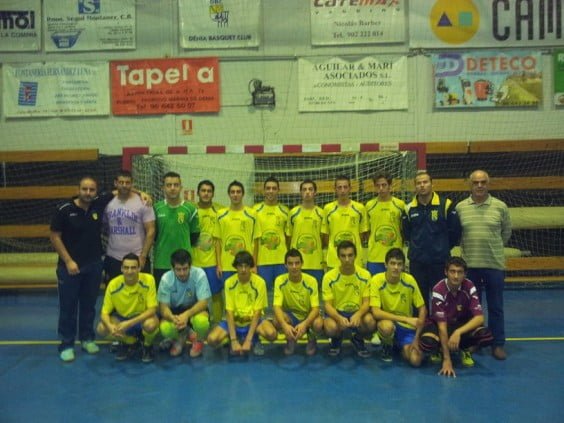 The second part began with Dianense mastery in game and occasions. Local waited for the visitor to go to the counter and extend their lead but two good shots Antonio managed to turn the scoreboard with two goals error. Busot followed those of his own and worked them because, again in contrast, managed to tie the game.

It seemed that the match would end like this but, in a play of Dianense computer where you had to shoot three times, Alvaro scored the fourth. Minutes later Antonio achieved the fifth and gave reassurance to dianenses.

There was time for local mark the fourth goal but in the end the match ended with an away win by 4-5.
By CDDénia youth FS played: Miguel, Lunar Alvaro (2), Antonio (3), Jordi, Santos, Palacios, Felipe, Riki, Igor and Pau Carrió.

Sunday's dianenses move to Ibi to try to keep the lead. The match will be played at 12: 00h to UD Ibense.