El Hospital de Dénia Today it has hosted a meeting of health professionals specialized in Pediatrics, from the 24 health departments of the Valencian Community. 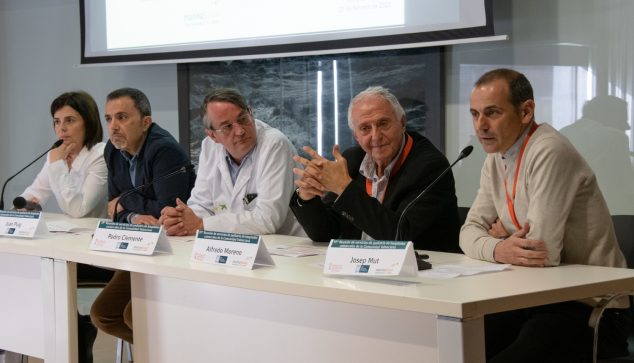 It is the XNUMXth annual meeting of the pediatric services of the Valencian regional hospitals. The day was opened by the Health Care Director of the Department of Health of Dénia -DSD-, Pedro Clemente, accompanied by the Commissioner of the Department of Health, Juan Puig, the Director of Care and Services, Alfredo Moreno, the Head of Pediatrics of the DSD , Josep Mut and the vocal of regional hospitals of the Valencian Society of Pediatrics, Ana Miralles.

During the meeting, the management of the neonate patient in the regional hospitals was discussed prior to the transfer to the Intensive Care Unit of the tertiary hospitals and the subsequent return to the reference center. In this sense, Dr. Mut, a specialist in Neonatology, has presented a protocol proposal on the actions and techniques to be carried out. The Head of Pediatrics of the Hospital of Dénia has also highlighted the importance of the fact that the neonates, once they are discharged from the tertiary hospital, are returned to the specialized care of their basic area in order to carry out personalized follow-up and involve The mother in breastfeeding.

Dénia: a case of success in humanization

The second part of the day has been dedicated to the humanization of Pediatric services in the regional hospitals. Dénia Hospital is a reference center as a hospital that promotes art in the service of health, through its cuidArt project, directed by the cultural manager, Alicia Ventura.

The project includes mural interventions of “urban art” in the rooms and waiting rooms, workshops for patients or recreational structures in the waiting rooms of external consultations.

In the Pediatric Department of the Dianense center, other aspects related to humanization have also been taken care of, such as the uniformity of professionals, the dream project, the Open Door Neonatology Unit or the admission to the hospitalization plant for nursing mothers of premature infants.