The Dianense player, "Pepelu" García Vayá has received the great news of re-dressing the shirt of the Spanish National Team, this time Sub 21, for the next games he has to play against the teams of Germany and Montenegro. 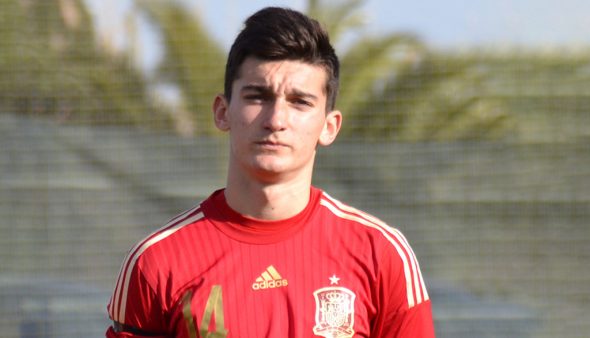 Pepelu with the national team shirt

Pepelu, who this season is playing in the Portuguese team of the CD Tondela of the First Division and with this call he is rewarded all the work he does in each training and matches he plays. The fact of being a starter in his team has made it possible that, after many months of absence, the Spanish coach, Luis de La Fuente, has summoned him again.

The Dianense will be present with the rest of the selected on October 10 at the El Arcángel stadium in Cordoba, where Spain will play a friendly match against the German national team.

The next commitment for the national team will be the October 15 in an official match, against the Montenegro National Team. The clash will be played at the Gradsik stadium in Pogdorica.

In this call, together with Pepelu, there are important players who usually play in their first teams, such as Ferrán Torres (Valencia), Adrià Pedrosa and Pol Lozano (Espanyol), Dani Olmo (Dinamo Zagreb), Fran Beltrán (Celta) Miranda ( Schalke 04) or Marc Cuquerella (Getafe).