The session says NO to the rescue helicopter transfer to Mallorca

The Councilor for Ecological Transition of the City of Dénia, Maite Pérez Conejero, met yesterday in Madrid with the director of the Merchant Marine, Benito Núñez Quintanilla, and the director of Maritime Rescue, José Luis García Lena. The councilor transferred to the heads of the Ministry the plenary agreement of the 31 day of October that "Asks the Maritime Rescue and Security Society not to transfer from Manises to Mallorca the base of the emergency helicopter that provides coverage from 1994, since the considerable increase in response time can lead to dire consequences in the event of an accident and endangers human lives". 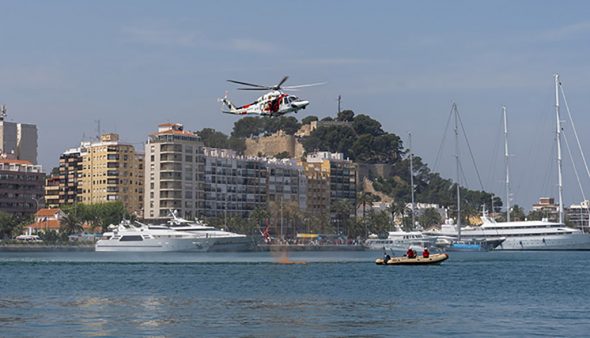 Pérez transferred the claims of the Association of Users of Moorings Puerto de Dénia and the Fishermen's Association, who state that moving the helicopter will mean that the response time in case of emergency in Dénia passes from the current 15 minutes to 45 minutes. This would mean that shipowners and users of the more than 500 vessels that are docked at the public moorings of the port of Dénia see the safety of sailors diminished when they go to sea.

The ministerial officials confirmed to the councilor the decision to move the base of the helicopter. However, after the claims of the different groups and municipalities that have positioned themselves against it, they pledged to study the possibility of strengthening with a rescue boat in the area.

From the Department of Ecological Transition will be convened in the coming days to the Association of Mooring Users Puerto de Dénia, the Fishermen's Association and the other municipalities that have positioned themselves against the transfer of the Maritime Rescue helicopter to inform them of the meeting and take joint actions with the objective that the helicopter stays at the base of Manises.