The second vice president and minister of Housing and Bioclimatic Architecture, Rubén Martínez Dalmau, has visited in Dénia the first housing office of the Xaloc network that the Generalitat has set up in the Region, accompanied by the mayor of the city, Vicent Grimalt, and the general director of Institutional Coordination of the Vice-Presidency, Adoración Guamán. 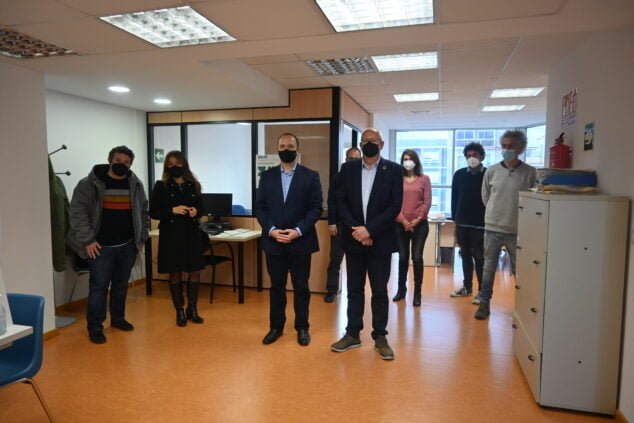 Martínez Dalmau has shown his satisfaction after checking the start-up of this office and "the facilities and improvements that it entails for people who must make arrangements in the area of ​​housing, building rehabilitation and urban regeneration."

"With this office we put Dénia in the first line of housing policies", since "we are creating a network of regional offices -some are going to open in the coming months-, which implies a significant effort in a policy of Generalitat housing based on trust in the municipalities, as people have to have a housing service at their side where they can easily access it, "he assured.

It is "a commitment by the Generalitat for the fundamental right to housing and today, here in Dénia, an important step is being taken in that sense," the vice president remarked.

Last October, the Second Vice Presidency and the Dénia City Council signed the collaboration agreement that established the conditions for the development of a pilot case in the Alicante municipality for the creation of the future network of Xaloc offices. This agreement has a budget of 69.600 euros and a duration of twelve months.

The Xaloc Network of Local and County Housing Administrations is seen as a collaborating body of the Generalitat to offer a comprehensive management service that includes information, social mediation, advice on housing, building rehabilitation and urban regeneration, facilitating access to a decent home for citizens and promote the integration of urban spaces.

Martínez Dalmau has assured that these offices "are decisive to have quality information on the real needs of the municipality and to gain agility in the process".

In addition, they are going to centralize many operations and managements of aid of rehabilitation, rent, young people, and even "information on possible cases of evictions to be able to prevent them and to act in advance, together with the city council, to give a solution".

For his part, the mayor of Dénia has shown his satisfaction "for the creation of this office, which was very necessary, and for all the work that the Department is doing to support and bring housing policies closer."

Through the agreement, five service units are entrusted to the City Council: a single window unit in housing matters, the rehabilitation of buildings and urban regeneration, the habitat management unit, the unit for the protection of housing tenure, the rehabilitation and energy efficiency and the Local Observatory of Housing.

The Consistory undertakes to have a Xaloc office, indicate in a visible place the opening hours to the public, participate in training activities, coordination and information campaigns.

The offices also have the forms and technical, informative and informative material of the Ministry and are in charge of keeping track of individual inquiries, information campaigns carried out and all other actions that may be accounted for.

Likewise, they must actively participate in the design and implementation of the Xaloc program and also in the documents, platforms or procedures necessary for its proper functioning.

For its part, the Department of Housing and Bioclimatic Architecture must guarantee technical and logistical support in the office that is part of the program for the correct development of the entrusted activities and exercise the functions of coordination with the corresponding council.

A monitoring commission made up of three representatives from the Regional Ministry and three from the City Council supervises the proper functioning of the office.