The FBR shoe concept reaches the world of football

Sports as diverse as athletics and soccer have shaken hands with the aim of trying to improve the performance of the players of the king sport. 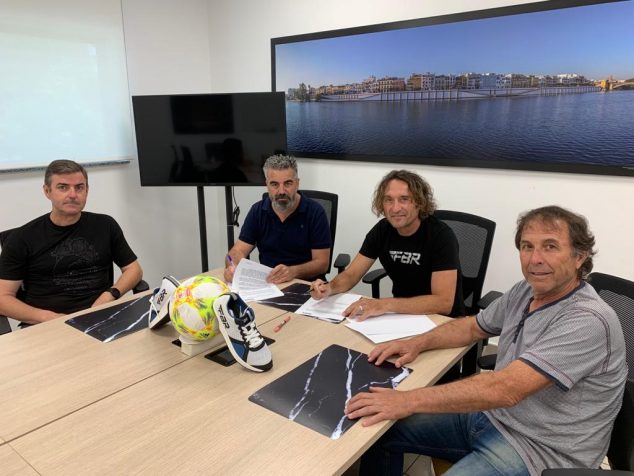 Seville was the scene of the signing of the agreement between the sports company Divergent Energy, represented by its creator, Daniel Moreno Moreno, and FBR Concept, represented by its creator, Dianense Franc Beneyto. In this signing there were two exceptional witnesses such as Eloy Angulo, a former soccer player who, among other teams, played many seasons at Valencia CF. In addition, it is said that he was the true discoverer of the Real Madrid player Sergio Ramos and of the Olympic athlete, physical trainer and Technical director of the Specific Method FBR for Soccer (MEFF) Tomás de Teresa.

The objective of the agreement is to develop the MEFF at national and international level, through a specific training plan plus the use of technological FBR shoes to help the player be faster, more explosive, resistant and agile. But above all to prevent a significant number of injuries, and even to recover from some such as plantar fasciitis.

For the project, which will be headquartered in Seville, there will be the experience and knowledge of former Spanish international athletes who will guide the physical trainers of each soccer team and club to get the most out of this innovative MEFF.

Divergent Energy has a patent related to what Barcelona FC longs for through its R&D (Barcelona Innovation Hub), Monchi, Sports Director of Sevilla FC and other European clubs such as Bayern Munich. It is a technology never applied until now and which, together with FBR, aim to make the search for new talents more identifiable and precise.