CFS Mar Dénia is on the right track in his journey through Group III of the Second Division B futsal. On this occasion, he beat Calvià-La Palma at home for 5 to 3, in the clash played in the Joan Fuster pavilion. 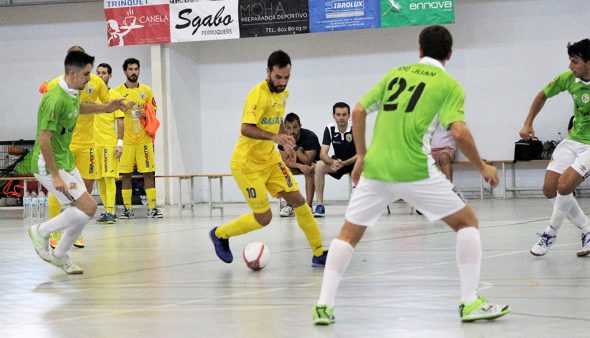 Despite the uncomfortable hours of four in the afternoon and strong heat prevailing in the pavilion, the public filled the stands and stood firm in their support for the Dianense team. The Balearic team, despite its youth, demonstrated its enormous talent getting to make the game very complicated.

The young but talented visitors raised a very physical game, with a high pace of play. Soon there were arrivals at both goals and Sergi showed his great form again.

In the minute 4 came the 1-0 work of Curro after a good collective play, where the strategy when executing a foul had a lot to do. But, two minutes later, the Mallorcan team matched after a robbery in a bad ball that was the 1-1. A defensive error that showed once again that in this category no concessions can be made to any rival.

In the minute 13, Luis Llinares put the 2-1 on the scoreboard, at the end of a good play by the whole team. From that moment on, the contestants chose to take a short break. The heat was suffocating and they preferred the non-aggression pact, so they came to rest with the minimum local advantage of 2 to 1.

In the second part, the Mallorcan team raised its pressure line and tried to drown the Dianenses with the exit of the ball and obtained a reward in two minutes because, after a robbery at the edge of the area, he managed to score the 2-2.

A new game began with both teams overturned in the rival goal with no time to rest. In the 27 minute, Omar marked the 3-2 with a strong external shot, and in the 32 it was Miguel who, likewise, crashed the ball against the bottom of the crossbar and in the rebound the ball voted inside raising the 4- 2 to the marker. This goal was much protested by the entire Balearic expedition when considering that the ball had not crossed the goal line.

After fitting this goal, the Mallorcan team quickly put on the goalkeeper player to try to stop the Dianean avalanche that enjoyed their best minutes of play and two minutes later they managed to reduce distances by scoring the 4-3.

There were five minutes left and the pace was frantic. On the next play, Sergi was attacking a ball and trying to throw quickly over the goal was blocked by Majorcan player Martín Leal, who saw the second yellow card. Therefore he was expelled, leaving his team in inferiority. Inferiority well taken advantage of by the Dianense team that on the next play scored through the mediation of Blai, who after several rejections scored headlining putting the final 5-3 with which he reached the end of the game.

Next week, even as a holiday, CFS Mar Dénia will travel to the town of Ripollet (Barcelona), where on Saturday at 18.30 hours he will play his fifth game of the season.