Like the previous ones he played, the CFS Mar Dénia had a complicated encounter against the 5 Martorell FS Group, a team recently promoted to the category that came to the Joan Fuster pavilion with the clear intention of taking the victory. In this duel, two teams were seen that were equalized to points and it was shown that equality was going to mark the development of the match. 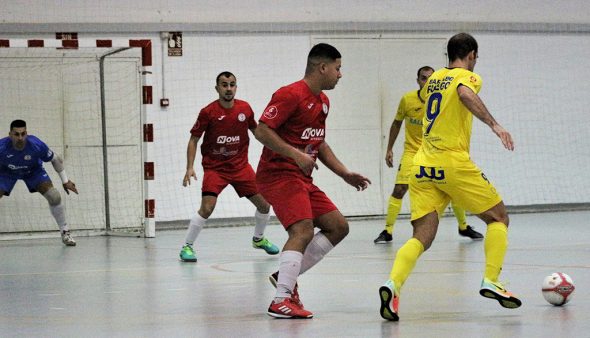 He started this one with a very high pace that both squads accepted. In the exchange of blows none took advantage. The intensity on the track was total, which is why the Catalan defense was soon punished with the 5 fouls. Before, in the 11 minute, visitors with a strong kick surprised the local goal, Sergi.

The reaction of the CFS Mar Dénia did not wait and, a minute later, Curro, after dribbling all the players that came to his path, sent a shot that slipped through the same squad of the visiting goal. The public celebrated it in style, given the beauty of the goal achieved by the Dianense player.

In the final stretch, the locals could not take advantage of the five fouls that their opponent added and had no chance of throwing a double penalty. The break was reached with the score of one draw.

He started the second half with the swords all over. The locals came out with new airs to the track before an opponent who also did not give up going to attack. The first arrivals with danger were from the dianenses. Migue and Ferrán were able to overtake CFS Mar Dénia but their shots did not find the way of the goal.

When the team headed by Jordi Durán was playing better, Luis Llinares's goal came and he very carefully picked up the ball in the second post to mark the 2 to 1. After fitting this much, the Martorell raised its intensity level. This caused some hard entries that were sanctioned with yellow cards. There was no rhythm given the continuous interruptions of the game. In the minute 31, the visitor Amrani was expelled. The foul was the sixth, the double penalty was executed by Blai deflecting the Catalan goal. Shortly after it was Curro who did take advantage of numerical superiority to mark the 3 to 1.

It seemed that it could be the definitive goal but nothing could be further from the truth. The Martorell went blatantly to the attack and the dianenses were forced to have to work piece by piece in defensive tasks. The intensity of the visitors punished them for a double penalty, this time Omar executed it splendidly, managing to expand the score with the 4 to 1.

Far from surrendering the visitors, playing with player goalkeeper, they managed to reduce the differences by scoring the 4 to 2. In the last attacks, the Catalan definition was nil, being the locals who had some opportunity behind the scenes to have scored the fifth.

On the next day, the Dianense team will travel to Sabadell to be measured on Saturday at 18: 30 hours at the Sabadell Swimming Club. Match that corresponds to the ninth day of the league.