El CD. Dénia still dreaming of promoting promotion with victory against UD. 2 0 to Swedish by. Goals from Brian and Michael in the final stretch of the game have allowed dianenses return to the promotion positions. This is joined by the Massanassa home defeat against Canals (1-3). 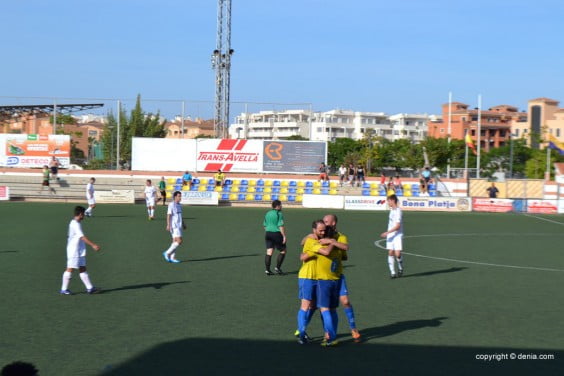 The group coached Jesús Moratal He jumped to Field Diego Mena knowing what was at stake. This meant that from the beginning were the locals who bore the brunt of the party. The visitors were limited to defend themselves in order.

The CD. Dénia lacked ideas in attack and took only danger in the first half, with all of Faye distant shots. Some came out and others found good response in the visitors' keeper.

In the second half, the dominance of the premises was increasing but they failed to bring too much danger to the visiting area. In the minute 65. Morelló shot in the small area and the UD goalkeeper. Swedish swerved to the corner. In the 71 minute, Gervasio threw a side foul, which Cristian topped out of the opposite frame.

With the passage of minutes the dianenses risked and surrounded the area rival. 82 minutes in, Faye center was good header Brian at the back of the goal UD. Swedish. Rather they blew the whole bench and especially a hobby that was having bad seeing that did not reach the goal.

In celebrating the goal, the Dianense Ismael saw the second yellow card so I left his team shorthanded. The referee reached the end of the game against the despair of the locals. But in injury time, a page torn from Falle that culminated in a cross pass over Dianense striker Michael allowed to score the second goal, which sealed the game.

Now awaits the whole Marina Alta another final, which will be before a Beniganim who is second and leads the team Dianense at a point in the standings.

Referee: Montero Torres: Shown the yellow card to the premises; Alex and Faye and local Ismael expelled for a second yellow 86 minute mark. For visitors he admonished; David, Ferrán, Alex and Fos.