Last week the director of the Calendari dels Brillants, Joan Josep Cardona, and the manager of the MACMA, Jovi Seser, met in a very special location in terms of the history of the literary almanac: the home of Mr. Joan de Plamolins, alter ego of the project coordinator and at the same time the backbone of each volume. A meeting to address the next edition of this veteran almanac that exceeds three decades of existence. As for the role of the Marina Alta Cultural Association, the publisher of the almanac, work is already being done on the 2021 volume in relation to the compilation of business collaborations in the region that act as patrons of each edition together with the municipalities , which act as coeditors through MACMA. 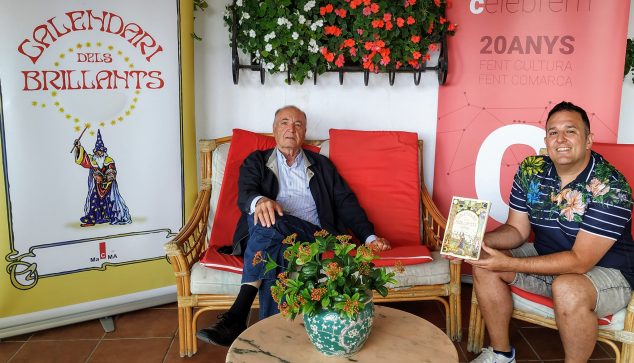 For his part, Joan Josep Cardona valued during the meeting the quality and plurality of the signatures that will once again make possible a unique document within our literary field. And it is that this year, given the overwhelming imperative of COVID-19 and all the consequences and implications of the pandemic in the economic, social and cultural tissues, the message of the Calendari dels Brillants aims to be more optimistic and bright than ever, so which publication will be virus free and analysis of the aforementioned phenomenon after a year of information saturation in this regard. In this sense, Cardona has had an impact on the sharpness that has allowed for more than three decades to spin a multidisciplinary discourse where the rigor and depth of the topics covered are combined with a peaceful and, above all, close point of view. A record, a tone, which, without forgetting the growing capacity for analysis of the central dossier - which will focus mainly on the local economy as an antidote against the economic and vital crisis - and on sections such as The raonated nature, will be promoted in the new edition.

In short, new incentives to increase the trajectory of the Calendari dels Brillants, which will be released at the end of the year, specifically in early December 2020. Meanwhile, the creative machinery of the Brillants is already underway.

The 50-meter-long woman "Trapped in time", from Tardor, is already part of the Marina Alta landscape
29 de julio de 2020