The Dénia City Council will request participation in the Paréntesis aid line promoted by the Generalitat Valenciana to help the self-employed and micro-businesses of the sectors most affected by the restrictions derived from the pandemic and which will be approved today in the plenary session of the Consell. A line of aid endowed with 160 million euros that will contribute between the Generalitat (62,5% of the total), the councils (22,5%) and the Valencian city councils (15%). 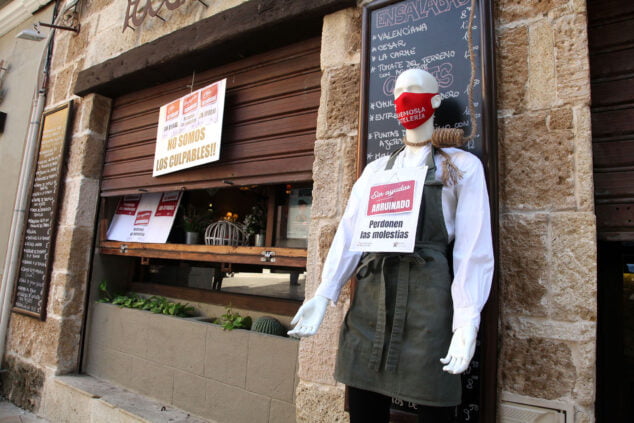 The Parenthesis grants will be managed by the municipalities, which will have a period of 15 days from the publication of the decree law to submit the request for participation, "Thing that Dénia will do immediately", as reported by the mayor, Vicent Grimalt, to the president of the Marina Alta Hospitality and Tourism Entrepreneurs Association (Aehtma), Cristina Sellés, in the virtual coordination meeting held this morning to study possible municipal measures and actions in the face of the crisis situation in the sector derived from the pandemic.

Grimalt has also announced that the Dénia City Council will launch a service that collaborates with those interested in the processing of aid.

These will consist, according to what President Puig pointed out yesterday, in a direct aid of 2.000 euros for each self-employed or micro-business in the most affected sectors, which will be increased by 200 euros for each worker in his charge. The amount that each beneficiary will receive can reach a maximum of 4.000 euros. In addition, the aid will be used to cover the current expenses of business activity from April 2020, when the pandemic began. This measure is expected to benefit, in approximate figures, 45.000 freelancers and 23.000 companies, with 136.000 linked workers.

The Parenthesis line is part of the Plan Resistir of the Generalitat Valenciana, which will allocate a total of 380 million euros to help companies, freelancers and workers to face the restrictions that came into force yesterday, January 21; especially in the case of the hospitality, tourism, leisure and artistic and cultural activities.

The mayor recalled that, according to municipal ordinance, the city council will not liquidate the occupation of public roads when, by decree, the activity has been suspended.

Regarding the establishments that had to make settlements with the local Administration, it has been reported that an advisory service is made available to them to request the postponement. You can contact the service by sending an email to ajudaempreses@ayto-denia.es.

On the other hand, last Monday the meeting of the company subgroup of the Occupation Table was held, in which different proposals on municipal aid for 2021 were collected.

Next week the COVID-19 monitoring commission will be convened, made up of the councilors of the government team, spokespersons for political groups and municipal technical staff, to also work on the design of these aid aimed at mitigating the effects of the crisis locally.

The 2021 grants will be worked on and agreed upon in these two participatory forums.

Reopening of hotels but with a specific schedule: the de-escalation plan that would begin next week
23 of February 2021
1 Comment

36.634
4.280
11.039
2.120
We use cookies necessary for navigation and traffic analysis. We do not use cookies that provide us with personal data or advertising cookies.
More optionsACCEPT
Manage consents