The City Council of Dénia, with the collaboration of entities and associations of the city, has organized numerous activities to celebrate 2019 Christmas and the arrival of the new year. Activities designed, above all, for the smallest, true protagonists of these dates, but also for the general public, families, sports and music fans, young people, the elderly and also those who, for reasons of Cheers, you can't enjoy these parties at your homes.

The image that illustrates the cover of the programming, and that the City of Dénia will use to congratulate this year's Christmas, is the work of Marina Bermejo, a student of CEIP Montgó and winner of the 2018 Christmas card contest. In this image the motto chosen to present the programming has been inspired, Nadal Colors. "Colors that convey a message of joy, celebration, hope and also symbolize variety and diversity. That each one choose the one he likes best, there is something for everyone!", Announced from the City Council. 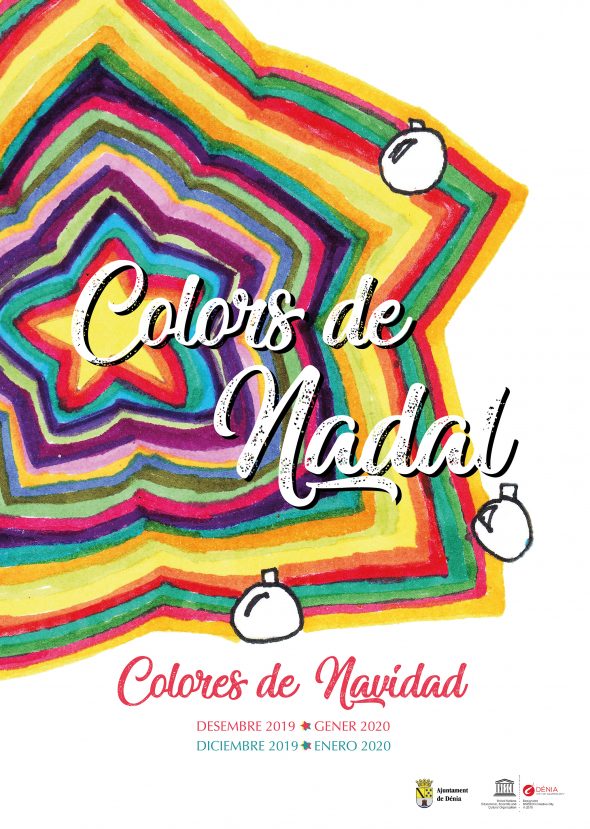 Among the activities for children, cinema sessions have been scheduled in Valencian, storytelling and workshops, theater performances and shows. Not forgetting the three appointments that the little ones expect throughout the year: the arrival of Santa Claus to collect the wish letters ((December 21, starting at 17 hours); the visit of the Royal Mailmen to collect the mail of His Majesties (January 3, 17.30 hours) and the Three Kings Cavalcade of the East (January 5, 18 hours).

Older people may also participate in activities organized by the Classrooms of the Third Age and the Retiree's Home, such as the Christmas Party planned for the December 19 at the Social Center. In addition, they will take the Christmas atmosphere to the Santa Llúcia residence and the La Pedrera hospital with the workshops that will be held with the residents by volunteers in the Classrooms and the carol concerts offered by the choir of the Home.

This vocal group will also perform at the Municipal Market where, as every year, a solidarity Christmas tree will be installed, decorated with shopping carts donated by the company Garmol, which will be drawn among the clientele. This year, this solidarity action is aimed at making visible the work of the Carena association of psychological support to people in the process of serious illness, end of life or mourning, and their families.

Solidarity also permeates the collection of essential products for disadvantaged people that the Dénia Local Police has been promoting for years. On December 19, from 11 to 13 hours, a uniformed agent as formerly will be placed on top of a platform in Cuatre Cantons to direct traffic and as a claim for people to leave, as was done before, the Christmas basket to the feet of the base. All material collected will go to the associations that make up the Solidarity Bureau

The young people will also find interesting activities in the program, such as the two days in which the artists selected in the Youth contest will paint their graffiti or a new edition of Urbajove planned for the December 28, which includes an escape room game, workshops and , even, an advance of the end of the year, in which the attendees will eat popcorn while the 12 bells ring. The next day another Urbajove day will be held with activities designed for a family audience.

In the sports section, two classics of these dates: the XX 8 Christmas Christmas Tournament to the Rodat field and the course Tortell de Reis, which this year reaches the eighth edition.

Remove hair with laser from the first session in Victoria, aesthetics and wellness

Why we should not throw towels to the WC: tips from Gesdenia
more promotions Browse Contests
The weather in Dénia
Dénia
20 February, 2020