Access to the IMV highlights the economic inequalities between dianenses neighborhoods

After the announcement of the approval of the minimum vital income, there is much expectation with the income that will help many families in the State at risk of extreme poverty. This, which represents 426 euros per month, is especially aimed at the most vulnerable households headed by people between 23 and 65 years old and who have a lack of sufficient income to survive. 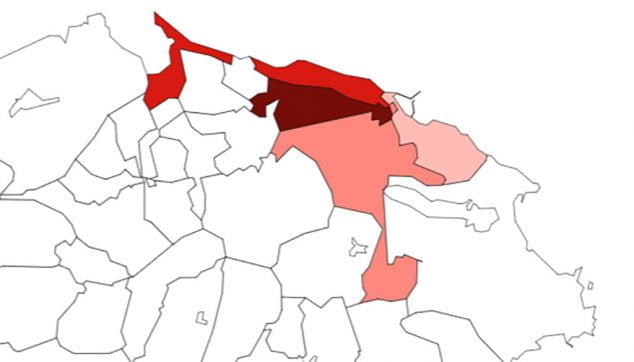 Salary differences in Dénia according to INE data

In this sense, a single person household is considered to be at risk of poverty when its income is below € 8.871 per year. However, when the annual income does not reach € 5.914, this person is considered to be at risk of severe poverty. The minimum vital income will, however, be directed to the most extreme cases with very high poverty (they do not reach € 4.435 per year) or with extreme poverty (income below 2.957 per year).

The economic borders of Dénia

This again puts in the spotlight the great differences in purchasing power found from one street to another in Dénia. Some of the city's neighborhoods have a very high percentage of the population that could ask for the IMV, while others are located with high percentages of wealth and very low percentages of families that can request the rent.

The most noticeable difference is between the south and the north. The area of Les Rotes and La Pedrera It is between the 30 and 37% richest nationwide, with average household income of around € 30.000. Furthermore, less than 10% of its population would meet the requirements to access the minimum vital income.

The urban area: place where differences are accentuated

Within the urban area these differences between families are accentuated, finding only one, the port area, in the median wealth nationwide with income of more than € 27.000 per year. Only 1 in 10 people will have the right to request the IMV.

The streets and dianenses neighborhoods where the lowest incomes are concentrated are the Paseo Saladar and the neighborhood West-Camps. In the first, 18% of households enter less than € 9 per year, surpassed by the second neighborhood, where 5.000% of families are in a position to request the minimum vital income.