Two goals from Panucci knocked down a complicated Tous CF

Great match made by the CD Dénia, which beat Tous CF by 2 to 0. The shock was marked by the two goals that Panucci scored in the second half and served to subdue an opponent who disappointed in his passage through the Field Diego Mena, although he played one hour in numerical superiority. 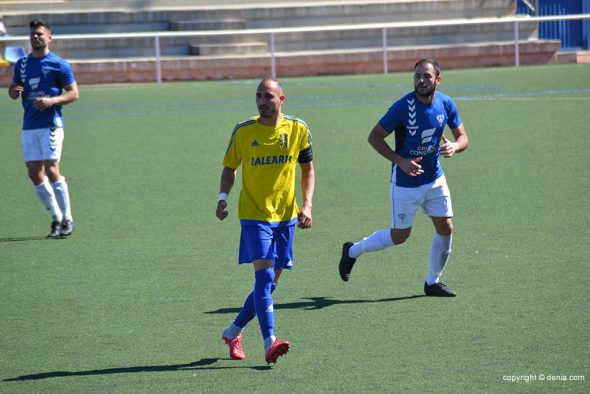 The whole of Marina Alta made a small rival that comes from being the best in the second round of the league. The Valencians directed by Vicente Mompó were unable to create a game despite having players of great quality. All this was due to the merits of the men Diego Miñana runs, who manipulated Edu López. Tous CF, seeing that they could not control the pace of the game, devoted themselves to losing time and using continuous provocations to the locals.

The first occasions of danger were for the locals, but the shots of Ferrán and Jordi went over the crossbar. In the only arrival at the visitors' door throughout the match, Jordi Casanova crashed the ball on the post.

He spent the half hour of play without Dénia managed to beat the local goal. Those of Diego Miñana lacked success at the time of the auction and above all rest a little more the ball, to avoid errors at the time of delivery.

In the minute 36 a small tangana ended with the expulsion of local Guerrero, who saw two yellow cards consecutively. A circumstance that worried the public that did not stop protesting all the decisions to the referee, Enrique Zambrano. It was at halftime with a header at point-blank range by Arthur, to which the visiting goalkeeper, Jordi, answered with a stop of great merit. With the initial draw the end of the first half was reached.

In the second half, the local coach, Diego Miñana endured the same system and this was reflected on the field. The Dénia clearly exceeded a rival who always looked for the physical shock and the losses of time.

In the minute 68 César went very well on the left side and put a measured center for Panucci to finish off splendidly head to the visitors' goal. This was the goal that opened the way to victory. A minute later the occasion was for Adrián Rubio, but his shot went out by very little.

The visitors tried to stretch their lines and the locals were very comfortable on the field, throwing whenever they could fast counterattacks. In 2 time, 0 arrived on a ball that reached Panucci, who at the far post hooked a beautiful volley that surprised the visiting goal, Jordi.

At the end of the game, the public fired theirs with a thunderous ovation as a reward for a total delivery by them. The Dianense victory takes on great importance due to the merits that have been carried out and because it remains in promotion promotion positions.