Twelve Creative Cities of Gastronomy of the UNESCO network, including Dénia, will prepare their version of paella coinciding with World Paella Day that is celebrated next Sunday, September 20, and organized by Turisme Comunitat Valenciana . A chef or a restaurant from each of the cities will prepare the paella according to their own cultural references and will share it on social networks. 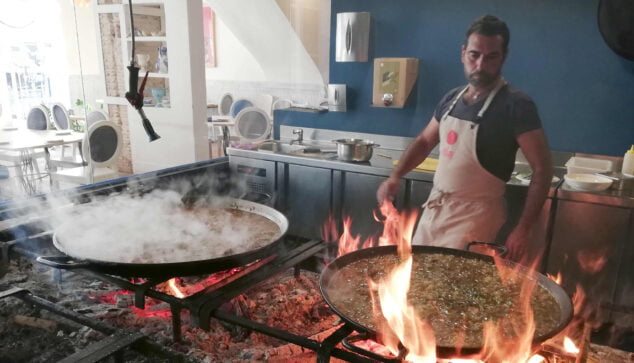 Rafa Margós prepares a paella in his restaurant in Dénia, Las Bairetas

In this edition the motto is "share paella with the world" and, at the suggestion of Turisme Comunitat Valenciana, the Office of Innovation and Creativity of Dénia extended an invitation to the rest of the creative cities of UNESCO. A week after the celebration, twelve cities around the world have confirmed their participation: Tucson and San Antonio (United States), Tsuruoka (Japan), Portoviejo (Ecuador), Rasht (Iran), Florianópolis, Belem and Paraty (Brazil) , Popayán (Colombia), Ensenada (Mexico), Burgos and Dénia (Spain).

The International Paella Day is a recognition of the most universal dish of Valencian gastronomy and one of the indisputable references of Spanish gastronomy. Eight million annual searches on the internet make it the fourth most important dish on the planet. The World Paella Day aims to share “our great dish with the rest of the world to celebrate, beyond recipes and ingredients, the internationality of paella”. This year, the edition presents as a novelty an international paella competition between chefs from eight countries that will be broadcast online from the Mestalla field, in the Champions Ligue style.

From Dénia, all cities were provided with a basic recipe and a suggestion of ingredients and traditional preparation methods. However, given the difficulty of finding certain ingredients, or even the container itself, thousands of kilometers from the Valencian Community, the participants were asked to adapt to similar products from their area of ​​proximity. The internationality of paella makes this a dish even assumed by very different cultural communities in many parts of the planet. In Mexico, for example, great paella festivals are held, in which the ingredients and the technique can surprise the Valencians, among whom debates and controversies about their conception are also common.

The videos of the different cities will be shown on the social networks of the City Council of Dénia and Turisme Comunitat Valenciana and we are sure that they will arouse as much interest and as much controversy as those created in the social environment in which paellas and dry rice are enjoyed. or the “rice with things”. The Office of Innovation and Creativity sincerely appreciates the response of the cities participating in this celebration and twinning game within the framework of World Paella Day.

For its part, Dénia joins the actions of this global celebration with a virtual round table (webinar) on "Paella and the culture of rice in the Valencian Community", organized by Gasterra, which will be held on Friday, September 18 , and with the recording of a video, like the rest of the cities.

Dénia's paella, cooked over wood, will be made by Rafa Margós, from the Las Bairetas restaurant and founding partner of El Paeller.