The National Police has arrested a 22-year-old woman in Dénia as the alleged perpetrator of five crimes of fraud and many others of usurpation of marital status using various internet websites for the sale and purchase of second-hand objects. 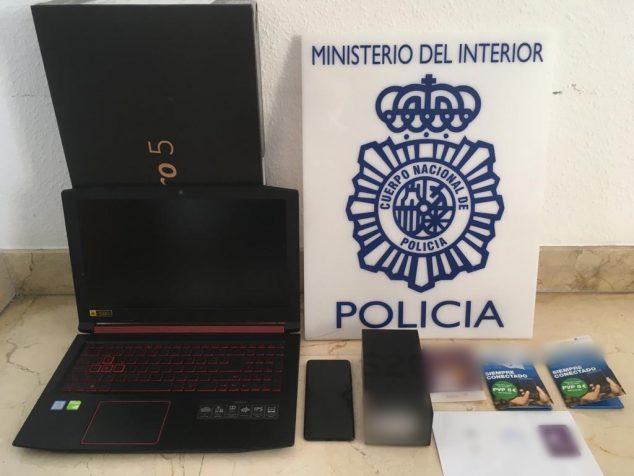 The agents of the Judicial Police Brigade of the Dénia Police Station received several complaints from all over the national geography that had a common link and this was that the delivery of the products purchased to the allegedly defrauded was carried out in this town.

The investigators' investigations then focused on two facts, the telephone number used in the scams and the delivery address of the packages.

In this way, the agents were closing the investigations around a person, who was recognized as the recipient of the shipments of the victims of the scams.

The modus operandi was as follows, taking advantage of the confinement situation imposed by RD 463/20 in a state of alarm, which prevented delivery by hand and led to increased electronic transactions that were delivered by courier, the arrested woman created various profiles on e-commerce websites and thus through internet pages for the sale of second-hand objects acquired a high-end mobile valued at more than 1.000 euros with the condition of paying it once received, which it never did.

With the terminal in his possession, he put it up for sale on the same web pages and it was effectively sold, but this time with the condition of sending it to the buyer once the money was received, a fact that never took place.

Again, he used said terminal to exchange it for an electric scooter, a scooter that was delivered to him by a courier company and whose owner was left without the agreed consideration.

Once fully identified, the agents of the Dénia Police Station made a special device in which they were located and detained. During this device, a house search was carried out in the detainee's home where the police recovered part of the objects involved in the scams.

Among the objects intervened was a computer that the arrested woman had received and had not paid for, which she had for sale on the same websites and for which she had already received offers.

All recovered items were delivered to their rightful owners.

The detainee was placed at the disposal of the Judicial Authority. So far, victims have been located in Seville, Zaragoza, Santiago de Compostela, Talavera de la Reina and Malaga, although the investigation is still open and the agents do not rule out locating new victims.