The Civil Guard has arrested a 52-year-old man in Calp, who had a valid search and seizure requisite for crimes of robbery and theft inside the vehicle. The arrest came when he and another partner suspiciously guarded the cars parked in the parking lot of a commercial establishment. 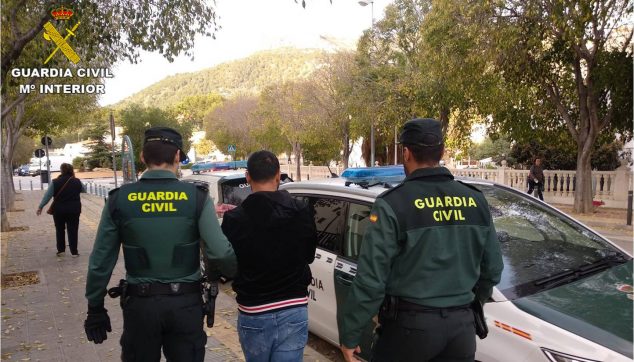 The preventive work of citizen security exercised daily by the Civil Guard made on Friday 10, identified and detained a man with several police records for theft inside the vehicle, in the parking lot of a commercial establishment in Calp.

The patrol formed by agents of the Investigation Area of ​​that locality, aware that there had been several robberies of this nature in that area, decided to monitor intensively the parking lots of hypermarkets, attentive to any suspicious movement.

Around 13:00 p.m., they observed a vehicle with two occupants, which circulated inside the parking lot at an abnormally reduced speed, turning several laps and not getting to park in any free space, but occasionally stopped stopping at Look inside a car.

Given the possibility that these people had moved there with the sole intention of committing a crime, they decided to proceed with their identification.

As a result, the two men had numerous police records for crimes against patrimony, one of them enforcing a national search and detention order, arising from a court in Elche (Alicante), for crimes of robbery and theft in vehicles.

In addition to this requirement, he also had an expulsion order from our country, because he was supposedly in an irregular situation.

On Saturday, after being brought to justice by the Courts in Duty of Dénia, he was released with charges.

The Civil Guard recommends not leaving visible belongings, bags, luggage, as well as other valuables, inside vehicles, especially when they are parked on public roads, in order to hinder any criminal action against the estate.

Barceló: "The number of positive cases and the number of deaths already exceeds the figures of the first wave"
25 January 2021

Visits are over: the Generalitat prohibits social gatherings throughout the Valencian Community
22 January 2021