C.Rem outstanding performance of Dénia and RCN. Dénia in the regional rowing

The "Diego Mena II Rowing Memorial", the 2014 Autonomous Fund Championship, was held with remarkable success, proving that it was also the IV Rowing SUMA League Regatta.

Remarkable performance of local boats, shining Club Rem Dénia in the category Veterans Male. The dianenses fought until the last meters with CN boat. Campello for second place they could not get. The winner in this category was the CN. Oliva with a time of 34 24 minutes and seconds.

The girls of the RCN. Dénia were another of the most outstanding boats in the Senior Women's Absolute category, where they crossed the finishing line in third position. The winners in this category were the Fishermen's Association of Torrevieja with a time of 38 minutes. The second place was for the CN. Altea to 13 seconds. The dianenses entered 21 seconds.

In Veteranas Female was won by the RCN. Torrevieja with a time of 36 51 minutes and seconds. The second place went to the RCN. Calpe, with the CN. Benidorm third boat to reach goal.

A total of 225 rowers took part in the test, in 25 teams, many teams from the Valencian Community were present, as well as numerous fans who could see a single regatta, as it passed through the Marine Reserve.

Diego Mena son and the councilman of Deporte, Juan Carlos Signes, were in charge of delivering the trophies, at 14 hours, in the facilities of Marina de Denia. 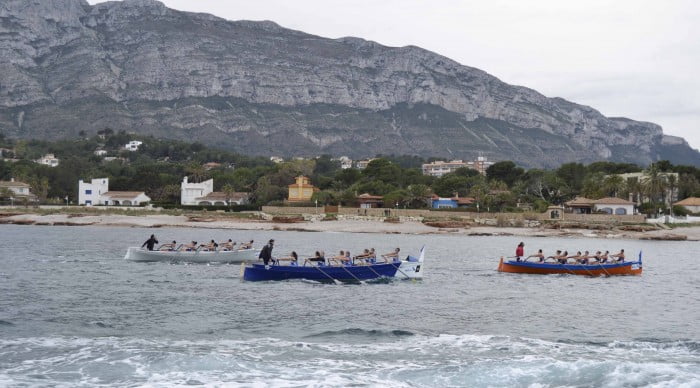